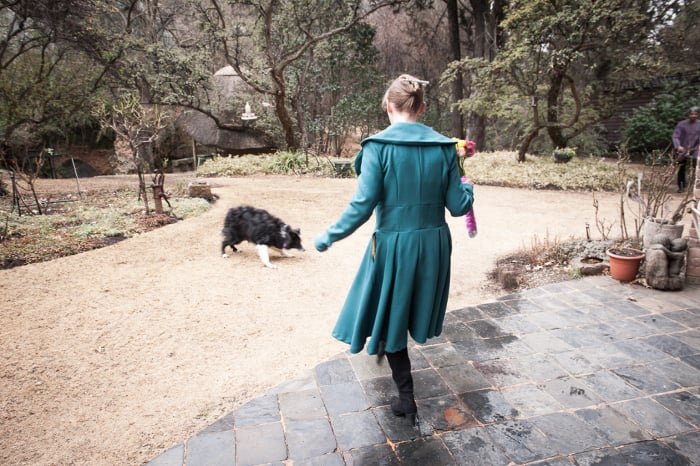 Last month, I eloped. My fiancé and I ducked off to Clarens where we got married in front of four witnesses, not counting the marriage officer and the B&B owner’s dog, a Border collie called Holly. The ceremony lasted 15 minutes and besides the photographs, the whole event took less than an hour.

I’m glad we did it that way. With three divorces between us, neither of us saw the point of having a huge shindig. The benefits of eloping are many, but I distilled them down to these five points.

1. It’s less stressful. No worrying about who would be insulted if they weren’t seated at the best table. No stressing about being on time. No politics over bridesmaids. No arguing over hymns or the music for the first dance or whether the starter should be fish or vegetarian or both. Ten minutes before the ceremony was due to begin, I was still constructing my own bouquet. Our photographer was bewildered by how relaxed it all was.

2. It’s cheaper. I bought my outfit on sale from YDE, we stayed in the B&B where we got married and paid our marriage officer with a bottle of Bartinney Cabernet Sauvignon 2010. I made the bouquet out of roses, foil and a pink streamer bought from Pick n Pay. The biggest expense was the photographer, who cost more than everything else put together. But we felt that the photographs were the most important part, as those are the parts of a wedding that last longest, no matter how much you spend on a venue.

3. It’s better for friends and family. Either you invite everyone or no one — so we invited no one. Some family members were put out, but when we explained that nobody got to witness us tying the knot, they had no grounds to complain. Because our friends and family didn’t have to buy us wedding gifts, or travel to a venue, we spared them needless expense too.

4. We got to do things on our terms. My first wedding was more for my family than it was for me, a show I was putting on to impress an audience. This time there was no hypocrisy. I’m a lapsed Anglican, my husband is an atheist Hindu and we were married in a civil ceremony by an ex-dominee who quoted the Bee Gees. I didn’t have to worry about anyone judging my shoes or weight or make-up, except when I posted some selfies to Facebook and Twitter, and then — well, if I didn’t look perfect, it was too bad.

5. It made social media easier to handle. Whether or not to allow cellphones at your ceremony, and whether your wedding has a hashtag have become two of the biggest challenges facing couples today. Though we’ve appeared in public together, we were social media public at the time. By eloping, we were able to keep our relationship private until a point where we were comfortable with being tagged together in a tweet.

Of course, eloping makes a lot more sense if you’ve already done the whole white wedding thing, as I have. (Been there, hired the string quartet, sold the T-shirt at Cash Converters after the divorce.) Since I celebrated my 40th birthday over the weekend, all the people who would have been guests at a wedding reception got to party with me anyway.

Now I look at the rings on my finger — nothing too bling — and smile at the memories. Being married is not about the wedding; it’s about the life you create together with another person. We’re already planning our next adventure.