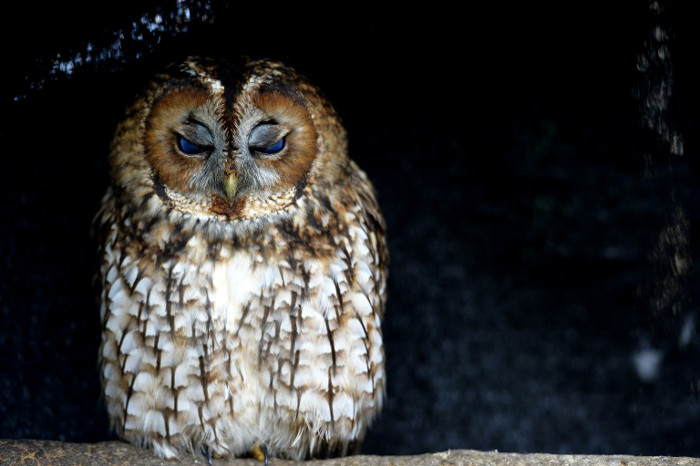 The patient opens his yellow eyes wide but makes no sound as acupuncturist Edurne Cornejo pricks four fine needles into his legs.

It is hard to tell whether he is surprised, as his eyes are wide at the best of times. He is an owl — and no newcomer to acupuncture therapy.

Two months ago this 25cm “little owl”, or Athene Noctua, hurt his back when he flew by mistake into a stovepipe at a factory in eastern Madrid, Spain. The city lies on a mountainous plateau teeming with such birds.

He was sent to Brinzal, an owl-rescue charity based in a park in the west of the city.

Now he lies, his speckled brown and white breast puffing in and out, as the acupuncture needles stimulate key points in his nervous system.

“When he first came, he couldn’t stand up. Then he started taking little steps. Now he is flying again,” says Cornejo.

She has given the unnamed owl 10 weekly acupuncture sessions so far.

“It stimulates self-curing mechanisms in the organism. It does not cause side-effects” as some medicines do, she says.

The use of the ancient Chinese technique in animals is growing worldwide, according to the International Veterinary Acupuncture Society, a US-based body formed in 1974.

Acupuncturist vets recommend it in animals for muscle and joint problems — such as the owl’s bad back — as well as for nerve, skin, breathing and gut complaints.

A family vet specialising in acupuncture for dogs and cats, Cornejo visits Brinzal as a volunteer to treat some of the hundreds of ailing night birds brought there each year by the public.

Elsewhere in the Brinzal centre, about 80 eagle owls, tawny owls, little owls and other species at various stages of recovery relax or practise flying again in covered enclosures.

Trays of dead chicks with fluffy yellow feathers are laid out for the predators to feed on. Inside one shed, live mice wriggle in the hands of staff preparing them for the owls’ lunch.

Owl psychology
About 1 200 birds are brought to the centre each year, of which about 70% recover and can be returned to the wild, says Brinzal’s co-ordinator, Patricia Orejas.

Brinzal’s centre opened in 1989 and has been providing acupuncture for its owls for six years. Cornejo estimates that acupuncture has been used on animals in Spain at least since the 1980s.

“We provide physical and psychological rehabilitation. But some sadly cannot recover,” Orejas says.

Some owls get too used to human company and cannot re-adapt to the predator’s life in the wild.

Among these is Eire, a plump seven-year-old tawny owl who sits on a branch in a spacious enclosure, blinking at visitors with big dark eyes.

She was caught and kept as a pet when she was a baby and later brought to the centre. Domestic life had already made her permanently unfit for the wild.

For other owls, Orejas and her team have training methods to revive their wild defences, teaching them which beasts are their predators, above them in the food chain.

They show them live rats, or models of falcons, and play recordings of the warning screech made by the owls themselves in the wild, to teach them that those animals pose a threat.

If all goes well, within months the rehabilitated night birds could be back in the countryside, helping the ecosystem by eating mice and other pests.

“The more mice-eaters we have in the countryside, the fewer problems we will have, because we will not have to use pesticides that can harm humans,” Orejas says.

“By receiving animals with problems here, we learn what problems there are in the countryside,” as the ailing birds give a clue to environmental threats in the areas where they breed, she adds. “That way we can design conservation projects.”

Orejas opens a large enclosure where a gang of square-browed eagle owls watch suspiciously from the far end.

One of them spreads its wings — spanning 1.8m — and flies towards the entrance, before turning its back and fluttering back again to a safe distance.

“That is how they should be,” Orejas says. “Flying away from us.” – Roland Lloyd Parry

Image – An owl sits in a cage at the Brinzal aviary, an owl-rescue charity based in a Madrid park on November 25, 2014. (AFP)