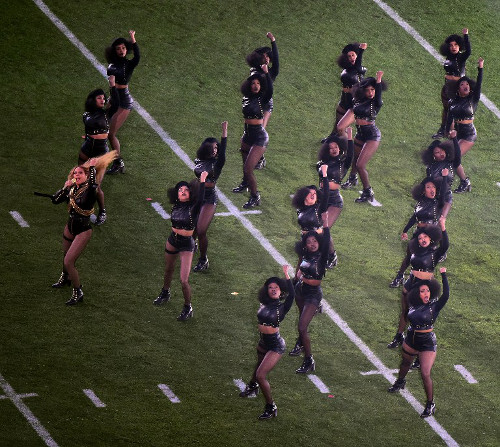 With references to the Black Lives Matter movement, Malcolm X and the Black Panthers, Beyoncé’s half-time show at the Super Bowl on Sunday might be the most radical political statement from the superstar in her 20-year career.

Backing dancers wearing Black Panther-style berets and clad in black leather were photographed after the performance posing with raised fists evocative of the black power salute by Tommie Smith and John Carlos at the 1968 Olympic Games in Mexico City.

Woods, who was reportedly armed with a knife, was filmed as he was shot dead after being surrounded by about a dozen police officers. A lawyer representing Woods’s family has called for the federal government to investigate the case for civil rights violations and examine whether any of the five officers involved should face criminal charges.

The dancers’ visual homage to the Black Panthers marked 50 years since the formation of the group, which had its roots in Oakland, less than 50 miles from the stadium where the Super Bowl was played.

Founded by Huey P Newton and Bobby Seale, the movement was a revolutionary black nationalist organisation and one of the most influential civil rights group of the late 60s, but its connections to illegal activities led then-FBI director J Edgar Hoover to call it “the greatest threat to the internal security of the country”.

Beyoncé was widely tipped to be preparing to make a deeply political statement with her Super Bowl show after releasing a surprise single and video, Formation, on Saturday, which referenced both Hurricane Katrina and the recent mass protests across the US over police killings of unarmed young black men.

The video shows Beyoncé sitting on top of a police car and includes scenes showing a young black boy dancing in front of lines of riot police, who put their hands up, before cutting to a wall of graffiti that reads: “Stop shooting us.”

On Friday, Beyonce’s husband Jay-Z announced that he would donate $1.5 million raised at a charity concert run by his streaming service Tidal last year to the Black Lives Matter movement and other social justice organisations.

Beyoncé’s performance was not the only political statement of the night, with Coldplay’s set featuring a marriage-equality inspired rainbow wave of placards held up across the stadium, which spelled out “Believe In Love”.

Commentators said the message was indicative of how far the gay rights movement has come. “This was a combination of local pride – I was born and used to live in San Francisco – and the simple reminder of the country’s progress on LGBTQ acceptance,” wrote Seth Millstein of Bustle.

“Even five years ago, it wouldn’t have been conceivable for the Super Bowl to express an unabashedly pro-gay message during the half-time show.” – By Jessica Elgot