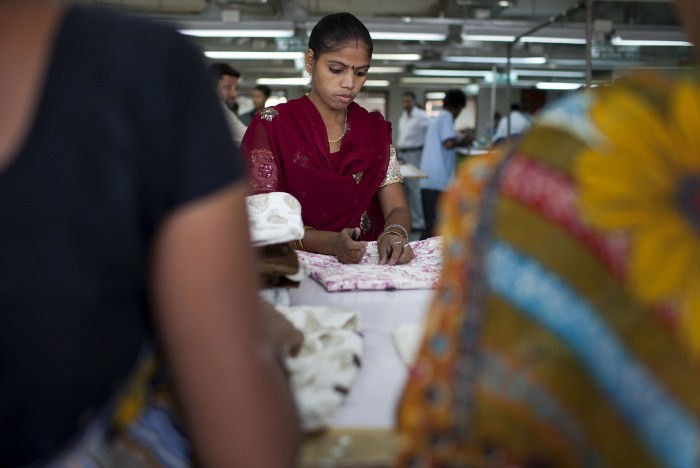 From her two-room concrete home nestled among the lush coconut plantations of southern India, housewife Kavita has seen the region’s textile industry flourish for a decade, thanks to the labour of poor, lower caste women like herself.

Promising a better life, “agents” have for years visited these poor, rural parts of Tamil Nadu and taken a steady stream of girls and women to work in thousands of cotton spinning mills, part of a textile and clothing industry that is one of India’s biggest employers and a major exporter.

The image of women from remote hamlets going to work, staying in hostels and earning money spinning cotton as part of a booming global garment supply chain, should be empowering in a country like India, an emerging power still plagued by poverty and male domination.

But former workers in Tamil Nadu’s Erode district describe a system of exploitation and bonded labour that has cast a dark shadow over India’s long-established textile industry.

“I tell all the women I meet not to go and work in the mills. I know what the agents promise and what is real. It is not the same,” said 23-year-old Kavita, dressed in a lime sari, a crimson flower in her long black plait, sitting on a woven mat in her village home.

“For almost a year, I wasn’t allowed to leave the compound where the hostel and mill was. They made me work double shifts. I only got out because I lied and said my aunt had died and I had to attend the funeral. I never went back.”

Just 13 at the time, Kavita was one of thousands of girls and women employed under “marriage schemes” offered by mills which mushroomed in Tamil Nadu when India’s economic liberalisation began in the early 1990s.

The schemes draw in cheap labour — mainly young women from poor, illiterate and low-caste or “Dalit” communities such as the Arunthathiyar — and offer lump sum payments at the end of a three-year period. They are promoted as an easy way to obtain the hefty dowries families need to marry off daughters.

Recruits are offered full board in hostels at the mills’ compounds, holidays twice a year, outings such as picnics and temple visits, and clean and safe working and living conditions.

But former workers and numerous studies by civil society groups such as the Freedom Fund, Anti-Slavery International and the Centre for Research on Multinational Companies say the women are kept in closed hostels, overworked, underpaid and abused.

“The binding of workers in this way, where they cannot change employers, is a form of bonded labour,” a 2014 study by the Freedom Fund and the C&A Foundation said.

“Very low wages, excessive and sometimes forced overtime, lack of freedom of movement and of association, verbal and sexual abuse were found.”

The study suggested at least 100,000 girls and women were being exploited in this way.

Industry bodies deny allegations of exploitation and say the schemes are “apprenticeships” in line with labour laws offering high wages. Cases of abuse are rare, they say.

Duped by dowries
The textile and clothing industry is one of largest and most important in the Indian economy.

It is the second largest employer in the country after agriculture, providing around 45 million jobs and making up 4% of India’s GDP and 13% of exports in 2013/14.

Much of the $42-billion a year export industry is located in western Tamil Nadu, where Namakkal, Coimbatore, Tirupur, Karur, Erode and Salem districts are referred to as the “Textile Valley of India”.

In the last 20 years, more than 2,000 processing and dyeing units, spinning mills and apparel factories have sprung up, employing some 300,000 people. Workers turn the cotton into yarn, fabric, clothes, much of it for Western high street shops.

But competition is stiff and, to boost productivity and increase margins, parts of this lucrative supply chain are built on bonded labour.

Traffickers are called “agents”, legal loopholes are exploited and girls are overworked, afraid to speak out for fear of losing the money needed for their weddings, activists say.

Dowries are given by a girl’s family to the groom and his parents at the time of marriage. The custom was banned more than five decades ago, but is still widely practised.

Under the “Sumangali” schemes — “happily married woman” in Tamil — mills pay agents up to 2,000 rupees ($30) to scout mud-and-thatch Dalit hamlets for families with single daughters.

Some women say they were regularly forced to stand for more than 12 hours a day working the spindles. Others speak of migraines, excessive stomach pains and heavy bleeding during menstruation from dust and poor ventilation in the factories.

Many said they were verbally abused or pushed if they were “slow”. They could not leave the mill compound without permission, and their telephone calls were often monitored or restricted by supervisors.

READ said it had documented 85 cases of suspicious deaths over the last five years.

“Cases are, however, hard to prove as girls are unwilling to discuss it openly or go to the police, fearing stigma in the community,” said READ director R. Karruppusamy.

Few workers have contracts, so find it hard to prove they were working in a particular mill and get compensation, he said.

The head of the South Indian Mills Association (SIMA), representing some 400 mills, said the government and the SIMA had strict codes of conduct on the treatment of workers, but admitted there might be violations.

“Some unscrupulous people have disobeyed these rules and now everyone has got a bad name due to this. Police are taking action as and when necessary,” SIMA Secretary General K. Selvaraju said.

He said apprentices in Tamil Nadu were paid 300 rupees ($5) daily, almost double the national average and some employers offered workers extras like a university education.

A senior official in Tamil Nadu’s labour and employment department said labour department officials carried out regular inspections in all industries, including textiles and clothing.

He denied allegations that police and local officials were often reluctant to act against the politically and economically influential industry.

Brands such as Gap, Primark and C&A which source some of their garments from Tamil Nadu say they do regular audits to ensure their suppliers comply with their codes of conduct.

“Sumangali is completely unacceptable and could result in the termination of a relationship should we find that the system exists in our suppliers’ operations and the contractual partner is not willing to stop the practice,” said Thorsten Rolfes from C&A Europe’s communications department.

Many retailers such as C&A are also part of the Ethical Trading Initiative of firms, trade unions and campaigners, which are tackling Sumangali by regulating recruitment agents, inspecting hostels and supporting charities to run campaigns.

“We are well aware that local mindsets are slow to change and that a lot still has to be done in Southern India to provide female workers with better options,” Rolfes said. “The scope of the problem may still be large, but … C&A is making a small but sustainable impact.”