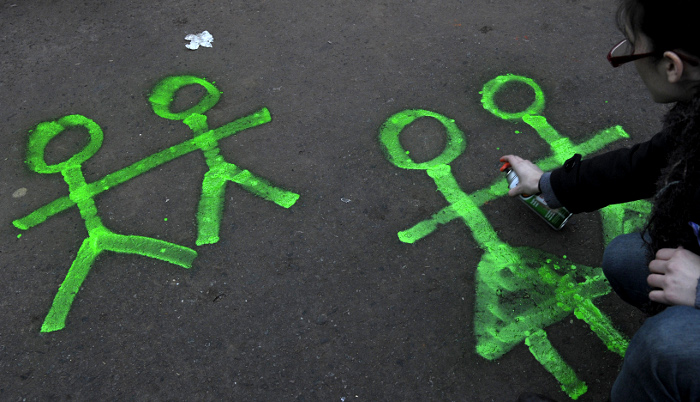 There is constant talk of the “crisis of masculinity”. The idea that men are going through some “massive communal trauma” due to the tectonic shift within society that has been brought about by the empowerment of women. The notion is that men are so threatened by women being “strong” that they have decided to throw their collective toys out the cot. There is continued talk of women “stepping out of their roles” and doing things they have “no business” doing.

“Behind every good man is a good woman.” Does the fact that a good woman can now be in front mean that the good man, in practice, collapses?

It would seem so. This supposed turn of events has men doing everything from grumbling and mumbling in bars to physically assaulting women. The men are stroppy that women are not barefoot in the kitchen, supporting their hopes and dreams armed with a stiff hair-do and stiffer smile.

I can somewhat understand that.

As men, you have spent so long not having to share your privileged space and are now “forced” to do so.

But instead of us tackling what is clearly a societal issue, as women we are sometimes given the advice to trick men into thinking this change is not actually happening.

All this is sad (for men especially) because it is based on the idea that in order for a man to feel powerful than it must be in light of a “weak” woman. My mother gave the example of how she found a woman who feigned inability just so that her man could feel useful around the house. The story went: a woman had her guests sit in the dark until her husband came home to change the light bulb. Upon completing this task he apparently exhibited the pride of someone who had single-handedly cured the common cold. The woman had identified this as being part of her “happy marriage” strategy.

I identified it as ridiculous.

I did not understand why the man had to be treated like a child to make him feel like he was useful. It could be equated to when a child is allowed to stir a bowl in the kitchen. They feel useful while you know they have hindered the entire process, but you love them anyway.

Could he not just simply have been useful?

If we are at the point where the only way you feel you can be a man is when I have to pretend not to be able to do certain things then we have a problem. There are not enough hours in the day to be waiting for men to get “around to things”. That is not feminism, it’s a fact.

It does not do women any good to have to “handle” their men because it means there are more children in the house than need be. In terms of men, all that happens is women call you “children” behind your back (which they sometimes do).

I have never been comfortable with the idea of submissiveness. The idea that women must somehow pull back on who they are so that they can make the men in their lives feel they have the ”space” to be men. An idea based on the fact that we are fighting for the same space. We have convinced ourselves that there is one type of alpha human, the male. So in order to be out our best as women we must push the current “alpha” aside and occupy the space.

We have, in a world that is constantly seeking to empower the dis-empowered, reached an impasse. We tell our girls to be strong and “go forth and conquer” but we tell boys that they are at the top of the food chain and must remain there. Problem is there is not enough room for all of us at the top, hence, the crisis. There is barely enough room “up there” for the men. Ideas such as “manly men” show that the room at the peak is very limited, not even all men get there.

The cure to this is to reconceptualise what it is to be “powerful” for men and what it means to be “powerful” for women and how neither of these is lesser than. There is a need to throw out the idea that in order to be a force to be reckoned with one must exhibit what is seen as quintessentially “masculine” characteristics.

To keep this idea is to stay in crisis mode, a crisis that manifests itself on two fronts. Firstly it makes men feel like they are being sidelined and makes them, in turn, whine that women are “pushing them out”. Secondly it denies the qualities within women that can be considered strong.

I once heard a female chief executive (of an energy-producing firm) speak of the importance of EQ (emotional quotient). The idea was that the qualities that are usually seen as making women weak, for example empathy or emotions, are actually strengths in their own right. It is not about women having to shy away from exhibiting “feminine” traits in order to seem strong but embracing them as a form of strength. For example it has been said that women make better managers because they are more likely to be able to decipher the mood and needs of their subordinates and thus create an environment that makes them far more productive than their male counterparts.

My aunt is a prime example of this balance, even within the private and professional sphere. She is a vice-president of a bank but also exemplifies the caring maternal nature that is so critical in any setting. She is not sitting around in the dark waiting for a man to change a light bulb but she does not deny the maternal and caring nature that people attribute to women. She “runs things” all day in her professional capacity but will still get us cookies and hot cocoa when she gets home, not because it is her “role” but because her EQ is as high as her IQ.

She understands that we like hot chocolate. She has those “female traits” that allow people to feel that love and connection that makes us human, allows us to function. That essentially makes the world go round.

It is more about admitting that men and women are different.

One is not better than the other, just different. It is also not merely paying lip service to this fact.

The idea that the roles and traits that are “womanly” make for something that is “lesser than” means that any woman who wants to prove herself must scrap for the limited “alpha male” space rather than create a new locale of power.

If men are to have the lotions and potions that come with the rise of “the metrosexual man” then they must understand that there is also the rise of the powerful woman. We are all allowed to borrow from the mixed pot of “good qualities”.

The argument is thus: if women were not told everything they represent is not as good as that of men then we will not come kicking and screaming (there is nothing wrong with a little emotion) for that “number one spot”. In doing so men, will thus, not have to sulk about being displaced.

There is enough space for everyone if we simply allow different personal qualities to be seen as strengths. There are many ways in which traits that are seen as “womanly” far outweigh those seen as “manly” and vice versa, even within the public power realm.

There are times, in the home and professionally, in the private and public sphere, where “womanly” traits will come in handy. Acknowledging this means we do not all have to walk the fine line between mollycoddling men so they feel better or simply beating them at “their” own game.

We can simply collectively make the world better.