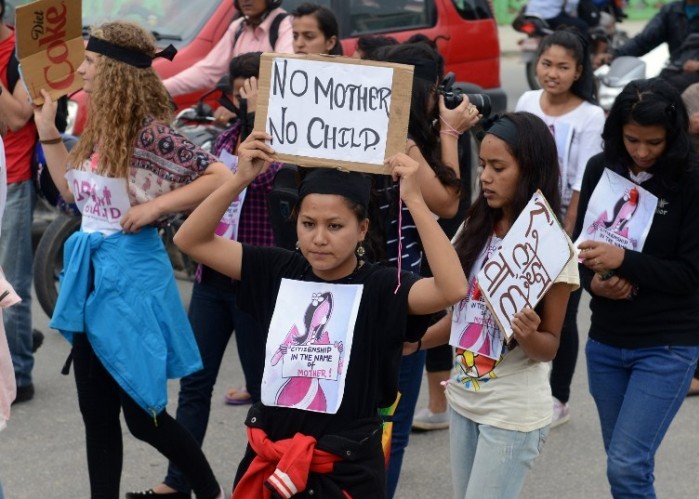 Nepal’s proposed new constitution has sparked fury from women who say their citizenship, property and other rights are being curtailed by the document designed to draw a line under centuries of inequality.

Lawmakers tabled a draft in parliament in June shortly after bickering political parties struck an historic deal on the long-awaited charter, spurred to negotiation by an earthquake in March that killed more than 8,800 people.

But a series of sometimes violent protests have since hit the impoverished, Himalayan nation, with activists saying the charter has failed to address a string of concerns.

Forty-year-old shop owner Rama Bista says the charter poses a major step back for women, in a country that has long favoured men.

Bista, who is married to an Indian man based in Nepal, has spent the last four years trying to secure citizenship for her two sons — their legal right under the current constitution.

“I cannot even speak of some of the things I’ve been told. They tell me my children are not Nepali, that I should go to my husband’s country,” Bista said.

But Bista’s already tough struggle is set to become impossible under the new charter which bars single parents from passing on their citizenship to their children and additionally says both parents must be Nepalese.

It will overturn a 2006 act that says children are eligible for citizenship as long as one parent is Nepalese.

Activists say the move could leave a million people stateless and will disproportionately affect women, who account for the vast majority of single parents in Nepal.

Bista says she is anxious about the future for her sons since citizenship is needed to get anything in Nepal, from a driving licence to a bank account.

The draft also makes it easier for a Nepalese man to confer citizenship on his foreign spouse, while a Nepalese woman needs to be married 15 years to her foreign husband before even being allowed to apply.

Campaigners fear provisions could also be used to prevent Nepalese wives or widows from inheriting property unless stipulated in the deceased’s will.

Instead of specifying that daughters can inherit ancestral property, the draft vaguely says “all children”. Activists are concerned this could be interpreted as sons and unmarried daughters only — the wording used in the country’s civil code.

The draft removes the explicit reference in the current constitution to “sons and daughters”.

“The draft dismisses the identity of a woman and reflects our country’s patriarchal mindset that seeks to maintain discriminatory practices,” said Sapana Pradhan Malla who heads the pressure group Forum for Women, Law and Development.

Right to abortion fears
Campaigners are also concerned the draft will be misused to restrict a woman’s right to abortion which was legalised in 2002 in the socially conservative country.

The charter bans sex-selective abortions, but activists say the provision is unnecessary since the practice is already illegal. They fear the charter will be used as a powerful tool to deny women abortions, by falsely accusing them of trying to abort girls in a country where boys are preferred.

“This issue should not be dealt with in the constitution,” said Sonali Regmi, Asia regional manager for the Centre for Reproductive Rights.

“We fear that the clause can be misused to limit a woman’s right to safe abortion, a key reason for the decrease in Nepal’s maternal mortality rates.”

Parliament is expected to eventually vote on the long-awaited constitution, which had promised to end years of political limbo in the impoverished nation.

Lawmakers were tasked with drafting the charter after a decade-long insurgency ignited by deep-rooted social, political and economic inequalities.

A committee is now set to draw up recommendations for changes to the draft, following a series of public consultations around the country.

In recent weeks, violence has marred the consultations, especially in the southern plains, home to the historically marginalised Madhesi community, many of whose members marry into families living across the border in India.

Lawmakers have brushed off the protests and campaigners’ concerns, saying the draft is not intended to discriminate against anyone.

“The constitution is not anti-women,” said ruling coalition lawmaker Bhim Rawal, who helped draft the document. “Every country has provisions to protect its nationality and sovereignty.”

But Bista and others remain fearful the charter will close the door on rights they had fought years to get.

“We call our country our motherland, and yet a mother’s identity has no value,” she said. — By Paavan Mathema