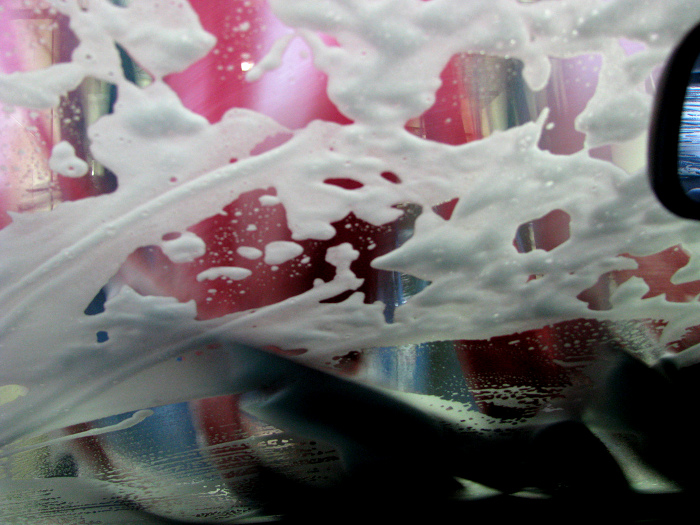 Car washes are a common sight throughout Nigeria, but Madinat Aliyu’s roadside business is unique: she is the only female car-washer in the country’s Muslim north, where sharia law often limits the types of jobs women do.

“This job has caused me a lot of problems,” said the 27-year old, surveying cars waiting to be cleaned in Gusau, the dusty two-street capital of Zamfara state where traffic is sometimes stopped by roving cattle.

Working in an occupation considered the exclusive preserve of men is particularly difficult in remote and highly conservative Zamfara, which has been active in implementing a strict interpretation of sharia.

After the state became the first to adopt Islamic law in 2000, authorities flogged motorcycle riders for carrying female passengers, and a 17-year-old girl was lashed two weeks after she gave birth, as punishment for having premarital sex.

Aliyu took up her work two years ago, hoping to use the 7,000 naira (£28) monthly salary to put her siblings through school following the death of their mother, the sole breadwinner. But her family begged her to quit and she has received “judgment and warnings” from strangers too.

“My grandmother cried for many days. Some people thought it was a joke to bring more customers. Others said if she is doing it for money, let’s just give her money to stop disgracing us,” she said as she drew a bucket of water from a well by the roadside. “But I hate laziness or depending on somebody else.”

Gender disparity is acute in Africa’s most populous country, which ranks 118 out of 134 countries in the UN’s gender inequality index. The problem is most pronounced in the north. Aliyu has heard of only one other woman doing a similar job – spray-painting cars in neighbouring Katsina state – in the 12 sharia-governed states.

Nevertheless Aliyu has admirers. “Some customers only allow her to handle their cars,” said her colleague Shamsudeen Mohammed, polishing a gleaming 4×4. “I was trained to wash cars by men, and I can honestly tell you women are better to work under,” he added.

Recently another woman approached Aliyu to ask for advice on starting her own car wash. “Unfortunately her family discouraged her. I told her, if you listen to them, you will find yourself begging, prostituting or marrying a man who is older than your grandfather,” she said.

Despite being considered a pariah by many, Aliyu has no plans to stop her work. “I see men doing something and I think, me too, I can do it. I feel like, me too, I get power!” – By Monica Mark © Guardian News and Media 2013