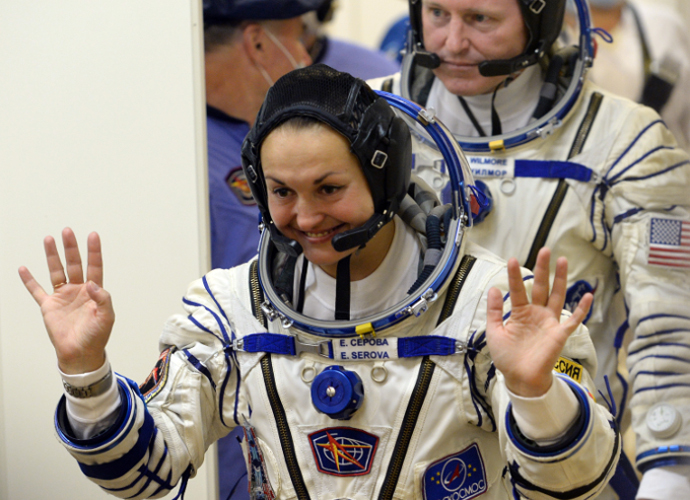 A Russian Soyuz spacecraft carrying an American and two Russian astronauts, including the first woman cosmonaut in 17 years, blasted off on Friday, Russian mission control said.

The Soyuz-TMA14M spacecraft took off at from Russia’s Baikonur cosmodrome in Kazakhstan to start the journey to the International Space Station (ISS).

Yelena Serova is the first Russian woman to fly to the ISS. She is accompanied by fellow cosmonaut Alexander Samokutyaev and NASA astronaut Barry Wilmore.

Their spacecraft is set to dock with the ISS at 2.15am GMT on Friday after taking a six-hour fast-track route.

They are due to join the ISS commander, Russia’s Maxim Surayev, his American colleague Reid Wiseman and German Alexander Gerst from the European Space Agency onboard the space laboratory.

The new ISS crew members are scheduled to spend a total of 169 days in space.

Earlier on Thursday, the trio took part in pre-flight rituals such as signing the door of their Baikonur hotel and receiving a blessing from a Russian Orthodox priest, before boarding a bus to the launchpad to cheers from relatives.

Serova is just the fourth Soviet or Russian woman cosmonaut.

“My flight is my job,” 38-year-old space engineer Serova said at a press conference this week, where she had to fend off questions about her hairstyle and how her daughter would cope in her absence.

“I’ll be the first Russian woman who will fly to the ISS,” she said. “I feel a huge responsibility towards the people who taught and trained us and I want to tell them: We won’t let you down!”

Russia is currently the only country that can send astronauts to the ISS after the United States stopped its shuttle programme.

NASA has vowed to continue cooperation aboard the ISS despite a major chill in relations over Moscow’s role in the Ukraine crisis.

But Russia has hinted that it may turn down Washington’s request to extend the lifespan of the ISS by four years through 2024, saying it is only needed until 2020.