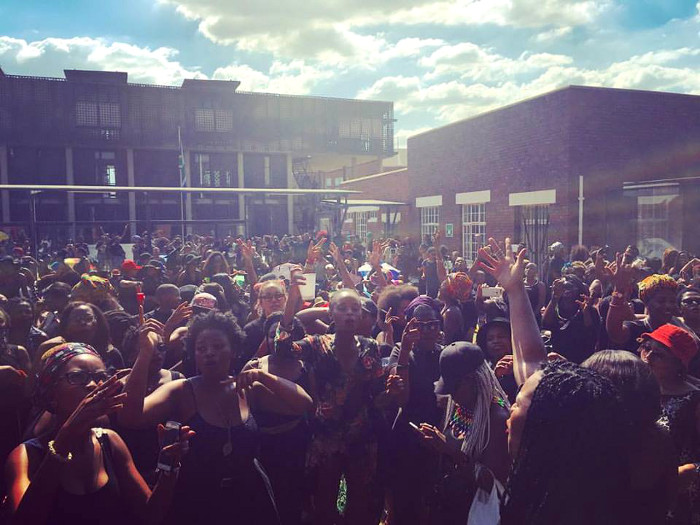 On the warm and bright morning of January 31 2016, #ForBlackGirlsOnly Johannesburg — an event organised for and by black cisgender and transgender women — took place at the Women’s Gaol at Constitutional Hill. The venue itself was once a women’s prison that held some of South Africa’s most prominent political prisoners. On the day of the event, hundreds gathered on the same ground where women such as Fatima Meer, Winnie Madikizela-Mandela, Sibongile Kubheka and Lillian Ngoyi stood as prisoners.

Public perceptions of the event ignited fierce debates on numerous platforms. The many critics of #ForBlackGirlsOnly made their opinions known on the event’s Facebook page, on talk radio shows, and on Twitter — often characterising the event as “racist”, “divisive”, “unconstitutional” and “exclusionary”. In response, many brilliant black women writers penned think pieces rebutting these critiques, while passionately contextualising why spaces like #ForBlackGirlsOnly not only exist, but must exist.

The public perception and heated back-and-forth surrounding #ForBlackGirlsOnly grew into an event of its own — shadowing the work of the many community organisers and volunteers whose work culminated in yesterday’s event.

The reality of the day itself was dazzling. Hundreds and hundreds of participants, black-clad and gorgeous, gathered in the courtyard of the Women’s Gaol with umbrellas, picnic baskets and cameras to document each other’s creativity and beauty.

Volunteers provided childcare to the many mothers, grandmothers and guardians who arrived at the event with their children. Black women filmmakers showcased their films and answered questions about their work and their challenges in the film industry. Black women emcees, poets, musicians, and DJs performed to the thunderous applause and support of listeners that could appreciate their work in unique and necessary ways.

The joyously infectious atmosphere was almost enough to avert our eyes from the barricades and security guards stationed at various points at the event’s perimeter — all hinting at an obvious and painful truth.

The simple truth was this: outside of the boundaries we had created for ourselves in an effort to keep safe, lay a world that remains openly hostile, deeply oppressive and antithetical to our safety, our happiness and our survival.

In an interview at the event, a young black women hoping to run her own podcast asked me about what I had felt when I read some of the vitriolic Facebook comments on the #ForBlackGirlsOnly event page. I replied that although I was not surprised, the comments genuinely scared me. But sharing space with that fear was a sense of comfort in that I (along with countless others) was involved in vital and sacred work. I was reminded of Toni Morrison’s words about the purpose of racism. She reminds that, “the function, the very serious function of racism is distraction. It keeps you from doing your work. It keeps you explaining, over and over again, your reason for being”.

#ForBlackGirlsOnly arrives in the midst of many organisations, individuals and movements who are done explaining their reasons for being, and instead are just doing the work. On the heels of much-needed feminist interventions in the political space, Black cis and trans women as well as black non-binary people are addressing the urgent socio-political issues that overwhelmingly affect us the most.

Whether it is rejecting virginity as a requirement for a right to education, or demanding the fall of patriarchy in our political movements, or challenging the overwhelming violence on black trans and queer women in our communities — we are fighting for our survival on multiple fronts.

We should not have to explain, justify and defend our right to a safe space where we can cry, heal, dance, sing, debate and organise amongst ourselves. We should not have to ask permission for our survival. And as I was reminded in the midst #ForBlackGirlsOnly’s splendour, we no longer are.