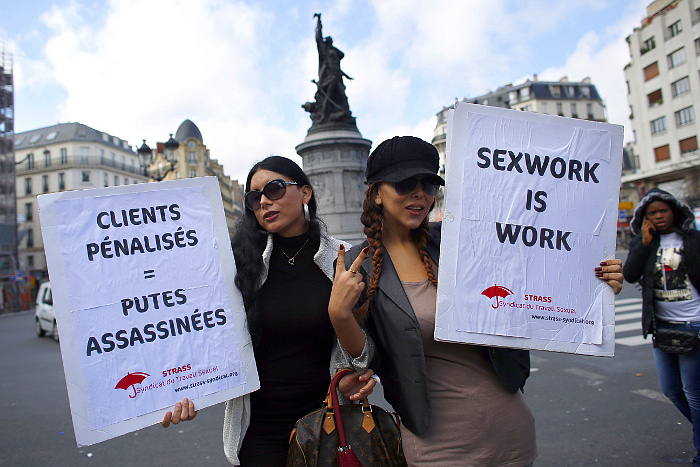 A group of French intellectuals have come under fire from feminists over a magazine petition in which several high-profile male journalists, commentators and actors demanded the right to visit sex-workers.

The petition – deliberately styled along the lines of a famous 1971 feminist appeal to legalise abortion lead by Simone de Beauvoir – was aimed at countering the government’s proposals to criminalise anyone who pays for sex in France. The French parliament will soon debate Socialist proposals to make it illegal to pay for sex, meaning anyone who buys sex from any kind of sex-worker would face heavy fines.

The men’s petition in the November issue of the magazine Causeur was signed by figures including the novelist and editor Frederic Beigbeder, several journalists and columnists, comedians, actors and the lawyer Richard Malka, who has defended clients including the former IMF leader Dominique Strauss-Kahn. The petition stated “some of us have gone, go, or will go to prostitutes – and we are not even ashamed”. They added “everyone should be free to sell their charms, and even to love doing it.”

But feminists and the government expressed outrage at what they saw as the hijacking of the feminist writer de Beauvoir’s 1971 abortion manifesto in which 343 famous women, including Catherine Deneuve and Jeanne Moreau, admitted having had an abortion, something which left them liable for arrest. That petition, which the media later dubbed the manifesto of the “343 salopes” – sluts or bitches – helped lead to the legalisation of abortion in France.

That the men’s petition on prostitution was deliberately titled “the manifesto of the 343 bastards” sparked fury from some women’s groups and MPs.

Najat Vallaud-Belkacem, government spokeswoman and minister for women’s rights, said: “The 343 salopes were asking to be able to freely use their body. The 343 bastards are demanding the right to use others’ bodies.” – By Angelique Chrysafis © Guardian News and Media 2013