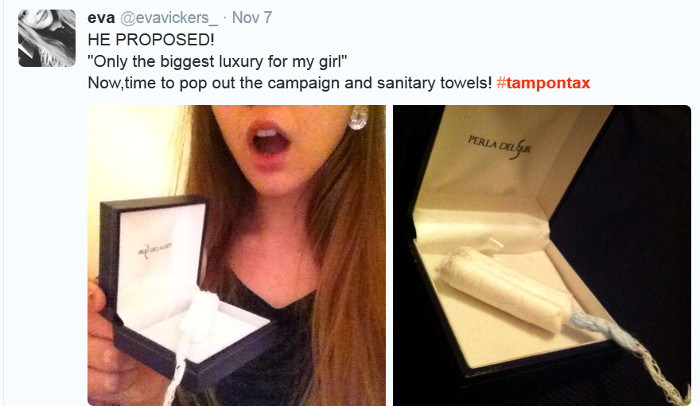 About 100 people gathered in Paris on Wednesday to protest a French tax on tampons and sanitary pads, as anger grows among women worldwide over high taxation of the essential items.

Men and women — some dressed up as giant vaginas and bloodied tampons — joined the rally in central Paris, brandishing colourful flags and banners reading: “No tax on my uterus,” “Each time I bleed, the state wins,” and “let us bleed without over-charging us”.

One feminist group at the protest hung pairs of women’s underwear soiled with fake menstrual blood from a clothes line.

“What is not right is that at a time when women are underpaid, when they are more likely to be unemployed, when they are paid less than men, each month, they have to pay a tax on their uterus: the tampon tax,” said Ophelie Latil who founded the French feminist collective Georgette Sand.

Georgette Sand called for the protest after France’s National Assembly last month rejected an amendment to reduce the VAT on tampons and other feminine sanitary products to 5.5% from the current rate of 20%.

The amendment was rejected after the government said changing the tax would cost 55 million euros.

Georgette Sand countered by saying that such a tax amounted to overcharging women for what is a “basic need”, estimating a woman will spend 1 500 euros in her lifetime on sanitary products.

The Senate is expected to discuss a new amendment on the issue on November 19.

Worldwide anger
The protest is the latest in a growing international movement of anger against what has become known as the “tampon tax”.

Online petitions have collected hundreds of thousands of signatures in Britain, France, Australia and elsewhere calling for a tax reduction on feminine hygiene products, which Canada has scrapped.

In Britain a government decision a few weeks ago not to scrap the 5% tax on sanitary products, with lawmakers arguing they were a “non-essential, luxury” item, sparked an uproar on social media.

Women posted pictures of tampons in champagne glasses and jewellery boxes under the #tampontax hashtag on Twitter and Facebook, while men also joined the chorus of disapproval.

In France, the #laissermoisaigner (let me bleed) and #taxetampon have been trending on Twitter.

At the French protest, Axel Cassin, who was dressed in a Santa Claus suit and holding a sign that said “less taxes in our chimneys”, said men should support women in their fight.

“A man can choose to shave or not to shave,” Cassin said. “A woman on the other hand cannot choose whether or not to have her period.” – By Solange Uwimana