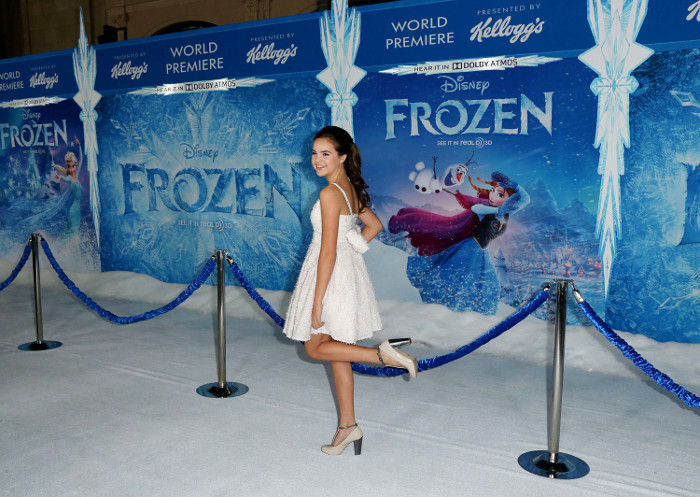 With two strong sisters at the centre of the story, Disney’s new animation Frozen seems like a winner for women. Loosely based on Hans Christian Andersen’s The Snow Queen, it sees the fearless Princess Anna travel the kingdom to find her misunderstood sister Elsa, who has fled after accidentally plunging the land into an icy winter with her magic powers. Sure, there are men along the way, but they’re not the prize: this is about female bonding, self-awareness, independence. It’s also a musical with cracking songs. Even the silly snowman sidekick is funny.

The snag is, both Elsa and Anna have the kind of proportions that would make Barbie look chunky: tiny nipped-in waists, no hips, long legs, skinny arms, pert breasts, small feet and eyes three times the size of the male characters’. We all know that big eyes are cute – just look at Puss in Boots. But in human females, they’re also an animator’s shorthand for attractiveness – and a major feature of adult anime, hentai. To use these big doe eyes as standard in supposedly realistic human females reduces the characters’ individuality and sends out a message: to be a princess, you must not only be brave but have a specific, unattainable brand of beauty. No deviation from the formula is permitted. From Sleeping Beauty’s Aurora to Aladdin‘s Jasmine, you’ll see a similar look in Disney princesses past.

Brave, a film released by Disney but produced by Pixar, had a heroine with more realistic proportions, but she was controversially glammed up for a Disney Princess Collection toy line. A petition supported by Merida’s creator, Brenda Chapman, claimed: “She was a princess who looked like a real girl, complete with the ‘imperfections’ that all people have … By making her skinnier, sexier and more mature in appearance, you are sending a message to girls that the original, realistic, teenage-appearing version of Merida is inferior.”

It’s a message that seems to have been lost on Frozen’s animators. In a recent interview, Lino DiSalvo, the film’s head of animation, said: “Historically speaking, animating female characters is really, really difficult, because they have to go through these range of emotions, but … you have to keep them pretty.” So animated boys can get angry, muck about, and it’s OK if they look silly – but girls must remain perfectly beautiful throughout? The cosmetics industry might thank him, but will parents? I’m not suggesting they ban their children from seeing the film – Frozen is one of the most entertaining family movies out this year. But when so many girls look up to Disney’s princesses as role models, surely it’s time for a rethink of the animation formula.

When I was eight, I watched The Flintstones, The Jetsons and Scooby-Doo. In art class, I instinctively drew normal-sized men but gave the women exaggerated hourglass figures with larger breasts and tiny waists. My teacher was horrified. I couldn’t understand her problem – I was simply copying what I’d seen in other drawings. Even if we accept animations as mere fantasy, in which every character is exaggerated for aesthetic or comic effect, the disparity between male and female figures raises issues. The male love interests in Frozen and Tangled may have puffed-up chests and broad shoulders, but their proportions are at least feasible. Half the male Olympic swimmers could pass for Disney princes. Even Dita Von Teese couldn’t compete with the Frozen girls – nor could our real-life Princess Kate.

This visual disparity only serves to undermine the Disney writers’ continuing efforts to present more complex, less compliant heroines. Gone are the demure Cinderellas and Snow Whites: the girls from Brave, The Princess and the Frog and Frozen are fun, flawed and learning on the job, not carbon-copy saints. These are real young women who should, and often do, reflect our times.

Many TV cartoons have progressed since the Scooby-Doo days, as have films: Shrek and Fiona decided to live happily as ogres. And it’s what children themselves want. In 2008, a German survey asked 1,055 kids what kind of figures they wanted to see on screen. Dr Maya Götz of the International Central Institute for Youth and Educational Television gave a choice of three different versions of a female cartoon character: one thin, one with average healthy proportions and one chubby. Seventy per cent of both girls and boys chose the average one as the character they wanted to watch.

So, when we worry about unrealistic body images and the sexualisation of young women, we shouldn’t just focus on Miley‘s twerking: let’s bring animation up to speed with female-friendly scripts. But don’t blame the girls in Frozen. To quote Jessica Rabbit: they’re not bad, they’re just drawn that way. – By Anna Smith © Guardian News and Media 2013