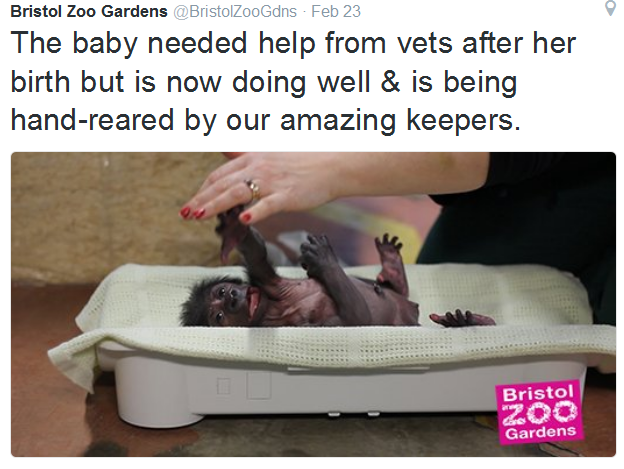 If you craned your neck you could just catch a glimpse of mum, lying on her back looking a little ruminative but well enough, tucked cosily away in a corner of Bristol zoo’s gorilla house. Baby was upstairs, already full of character and life and trying to heave herself upright though she is only 11 days old.

Their story is extraordinary. The mother, Kera, a western lowland gorilla, is recovering after undergoing a rare emergency caesarean operation involving expert vets but also a gynaecologist from the local maternity hospital, who is used to delivering less hairy offspring.

While mum recovers, baby – so far unnamed – is being hand-reared by keepers at the zoo. A team of five is working shifts day and night to give her human formula milk every three hours, and sometimes puts a little cardigan on her to keep her toasty when it gets chilly.

The question of what happens next is almost as fascinating as the operation. The zoo is not 100% sure of who the father is. It could be Jock, the 32-year-old silverback in the group. But it is thought more likely to be his nine-year-old son Komale. Tensions on the zoo’s Gorilla Island are building between the pair.

The trauma of the operation and the separation that has followed means Kera may not necessarily make a good mother, and her baby may have to be fostered with another female gorilla. “It is complicated,” said John Patridge, senior curator of animals at the zoo. “It’s all to play for at the moment. The most important thing is that the baby is doing well and Kera is on the mend.”

It did not look good for Kera this month when she showed symptoms of potentially life-threatening pre-eclampsia. She was taken to the zoo’s medical centre where she was cared for by the in-house team of vets and by David Cahill, a professor in reproductive medicine and medical education at Bristol University and gynaecologist at the nearby St Michael’s hospital. For the sake of mother and unborn baby, the decision was made to undertake a caesarean section, a rare but not unknown procedure for gorillas.

Cahill said: “Following our assessment, we considered that Kera might have pre-eclampsia, a condition that humans get, and that the only way to treat it was by delivery. We also thought that the baby in her uterus was showing signs of being very unwell and in need of delivery. My colleague from St Michael’s hospital, Dr Aamna Ali, and I prepared for this extraordinary caesarean section and delivered a little girl gorilla.”

He had delivered hundreds of babies by caesarean in his career, but this was the first time Cahill had delivered a baby gorilla by this procedure. “It was very special, very different,” he said. “Along with having my own children, this is probably one of the biggest achievements of my life and something I will certainly never forget.”

Next came the problem of how to care for the baby, which weighed in at just over a kilo. Mum was too unwell to help. Lynsey Bugg, curator of mammals, was one of those present at the birth. She said that at first the gorilla needed some intensive care to help her breathe.

Just as with human babies, it was also judged that the animal needed skin-to-skin contact. Keepers took it in turns to do just that.

Bugg said the baby, who is not on show to the public, was now doing very well. “She’s a determined little lady and strong-willed. I think that helped her survive. She’s already trying to haul herself up.”

Although the baby has a team of human carers, the team are keen to give her the best chance of being accepted by the gorilla group. She and Kera are both being kept apart from the others, but they can see her and sniff her.

The best case scenario is that Kera – who herself was rejected by her mother at a zoo in Barcelona and hand-reared by humans in Germany – accepts her baby. But it may be that another female gorilla, perhaps Romina (who underwent a pioneering operation to cure her blindness) may act as a foster mum.

If that is to happen she would have to be trained to bring the baby to the wire and allow the little one to be given bottled milk until she is old enough to be weaned.

As for the males, Komale’s days at Bristol zoo could be numbered. If tensions between him and his father, Jock, continue, he will have to be transferred from Bristol, where he was born, to another zoo. Just as with humans, the arrival of a baby can change everything. – By Steven Morris