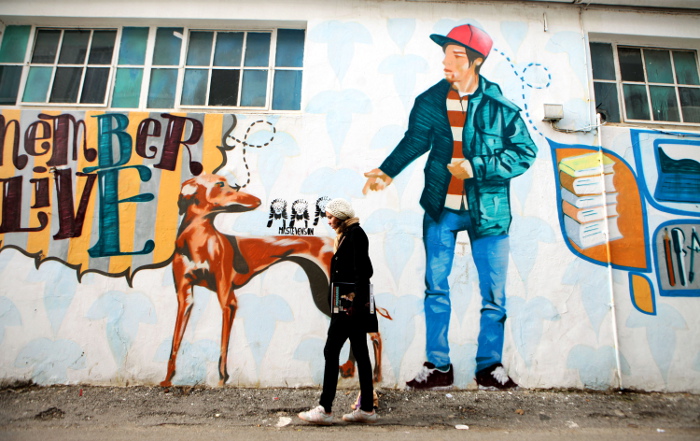 Eight months ago, I relocated from Johannesburg to Grahamstown. Now, I realise that at this point you might be asking yourself the following questions:

a) Why in the world would you move to Grahamstown? I mean, aren’t you supposed to move from Grahamstown to Johannesburg, not the other way around?

I moved to “Graham’s town” / e-Rhini / Sleepy Hollow / City of Saints / Settler City / Student City because I was offered an opportunity to work with a dynamic cohort of township-based high schoolers. Through the use of film, radio and print, they centre their marginalised voices by taking ownership of their histories. For me, this opportunity not only disrupted the assumed rural / urban dichotomies but it also challenged the oversimplified and one-dimensional popular image of the technologically ignorant, archaic and conservative individual from “ezilalini” / the countryside (at this juncture I must point out the fact that there is an assumption that the Eastern Cape is one big countryside. I feel it’s important to emphasise that not all places in the Eastern Cape are rural. Surprised? Don’t be. Think of it this way. Not all places in Gauteng are urban. Right? And of course the rural / urban binary is problematic and simplistic). I felt that the agency these young people have assigned to themselves transcends the notion of place. For me, the proverbial “gold” is wherever they are.

b) Where is Grahamstown?

For those who have no clue where Grahamstown is, I understand. Were it not for my short stint as a BSc (information systems) student at Rhodes University, I wouldn’t have known about “Graham’s town”. More often than not, people who are aware that I relocated to “Graham’s town” still ask me how I’m finding Cape Town. And after numerous attempts to explain that I am in the Eastern Cape not the Western Cape, I have decided that “Cape Town is great” is the easiest response.

c) Who is Graham and why is this his town?

I asked myself this question the first time I went to “Graham’s town”. Seemingly, a Lieutenant Colonel by the name of John Graham founded the town (then military outpost) in 1812. According to Wikipedia he established it as “part of the effort to secure the eastern frontier of British influence in the then Cape Colony against the Xhosa, whose lands lay just to the east”.

For me, what has been jarring about “Graham’s town” is the omnipresence of colonial memorabilia, statues, monuments, houses etc. One cannot help but feel alienated and marginal in a space that relentlessly honours settler history. As a person of colour, it has been difficult to find a sense of belonging and home. My saving grace has been the township in which I work.

Some call “Graham’s town” a “divided city” and I can indeed attest to that. Not too long ago, I was speaking to a five-year-old girl from Extension 8. She asked me where I live. I told her that I live in town. She said “uyaxoka!” (I am lying). I asked her why she said that and she said “abelungu abahlala e-town” (only white people live in town). This was a poignant moment for me. It was at that moment that I realised space is political. I truly understood that even though we live in a supposed “post-racial” society, our day-to-day interactions are governed by structural racism (among other isms). This young girl has learned from the world around her that people of colour are non-entities in Grahamstown’s “nirvana”. What this young girl taught me is that there is a structural invisibilisation of spaces occupied by people of colour in John Graham’s town.

d) What’s there to do besides the National Art Festival (NAF)?

Life continues pre and post NAF. We go clubbing, we eat out, we cook, we cycle, we get tattooed, we attend the many churches that “Graham’s town” has to offer, we study, we work, we love, we fight, we celebrate, we marry etc. Not everything revolves around NAF. In actual fact, we even live our ordinary lives during the festival. And yes, we dislike the fact that during NAF we are inundated with traffic jams because it feels like Joburg all over again.

e) What happens when all the Rhodes University students are gone?

I have always heard people say that “Graham’s town” is “dead” without the Rhodes University (RU) student population. Yes sure, everyone’s favourite club closes and eating places close early etc. But to suggest that there is no activity outside of RU is a misrepresentation. So what happens if you’re not a student at RU and you live ekasi (in the township)? Do you cease to exist because RU students have gone home for the holidays? From what I can see, life continues, with or without the students. “Graham’s town” is much more than a “student city”.

f) Is Grahamstown really a City of Saints?

What has fascinated me about “Graham’s town” is its many opulent churches. One truly cannot walk through “Graham’s town” without tripping over a cross. On Sundays, one is woken up by resounding bells. It’s beautiful. As for the phrase “city of saints”, I’m not sure. Don’t get me wrong. “Graham’s town” is a lovely place with nice people but at the same time there is an underlying darkness that one cannot escape.

When I first arrived in “Graham’s town”, I was livid after a couple of days of being there. I was outraged by the fact that a white storeowner asked my partner (who has a Swati name), “Don’t you have an easier name?” Another incident is when a white woman was introducing my partner, my brother and me to her family. What was interesting about this introduction is that she identified us by our hair grades and ethnicities (which she got wrong by the way). She said, “They have dreadlocks and they are Zulu”, when in actual fact my partner is Swati, my brother is Pedi and I’m Swati and Zulu. And I’ll never forget this one incident where a white record storeowner started ranting about how her children play with black children all the time. I don’t remember the whole conversation but what I do remember is feeling uncomfortable that she felt it necessary to score brownie points by stating how many black people she has in her life. I think what sparked that conversation was my partner’s interest in jazz and I guess the storeowner was trying to find an entry point and she saw Charles Mingus and thought “Aha! There’s a brown face. Let’s talk about how ‘liberal’ my children are”. All we wanted was to buy a Mingus record. Nothing else.

The list is endless and with time I’ve learned to pick my battles because being angry all the time is exhausting and it becomes an excuse for people to caricature your rightful anger by labelling you as the “mad black woman” (thanks Tyler Perry).

Image – A festival goer walks past a mural off High Street on July 7, 2011 in Grahamstown, South Africa during the National Arts Festival. (Gallo)