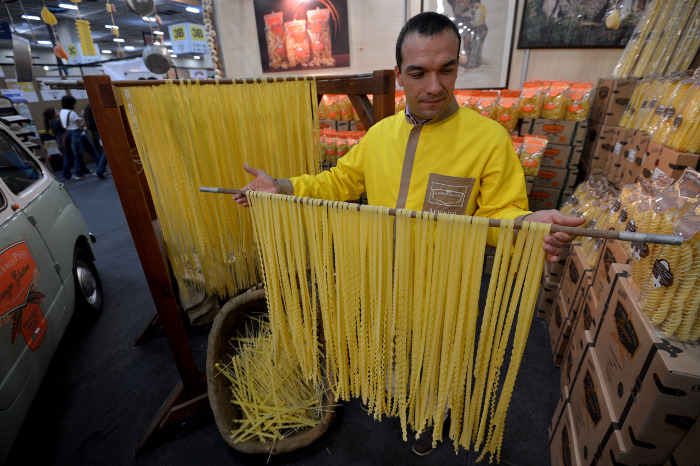 The news that Italians are eating less pasta – consumption has dropped from 40kg to 31kg per family per year in the past decade according to the Wall Street Journal – would have come as welcome news to the poet, writer and founder of the Futurist Movement, Fillipo Marinetti. In the Manifesto of Futurist Cooking, published in 1930, he suggested banning the consumption of pasta on the grounds that it led to lassitude, pessimism and general absence of get-up-and-go. (Incidentally, he also wanted to do away with knives and forks.)

The reasons behind the recent decline may be more prosaic. Changes in work practices and a gradual incursion of foreign foods (sushi in particular) are tempering the nation’s passion for pasta. Fear of weight gain is another factor: according to a Nielsen survey, the percentage of women aged between 26 and 30 who believe pasta is fattening increased by 26% between 2008 and 2012. Among men of the same age, the figure rose by 16%.

As John Dickie pointed out in his fascinating book, Deliza, the four-course structure that we have come to accept as the classic Italian meal – antipasto, primo piatto (pasta or rice), secondo piatto (meat or fish), dolce (pudding) – is of relatively recent 1930s origin. It could be argued that, in eschewing pasta, Italians are only returning to older habits. Indeed, in my various journeys through the country, I sometimes felt I was the only person stuffing themselves with all four courses twice a day. Except on high days and holidays, people would eat two courses, including pasta, at lunch, then a meat course in the evening.

While Italians may be eating less pasta than of yore, it would be premature to diminish its importance in the national psyche. In all its forms, it is still the national dish, with a history going back to the Etruscans. Pasta links Italians to their past and to their sense of identity. In spite of the effects of internal migration, external cultural pressures and the modern trend to culinary homogenisation, most Italians still have an intense sense of local loyalty – campanilismo – part of which is reflected in local foods and dishes. Anyone who has witnessed the passion with which Piedmontese, for example, discuss the proper filling for agnolotti will understand the remark of an Italian friend of mine, who told me that his countrymen “speak and eat in dialect”.

It is, perhaps, ironic, that consumption of pasta is growing outside Italy. In the UK, according to the International Pasta Organisation, in 1987 we consumed just £53m worth of the stuff. In 2009, this had risen to £282m. And that figure is still rising. While Italy may be slowly falling out of love with pasta, our own passion shows no sign of abating. – By Matthew Fort © Guardian News and Media 2013