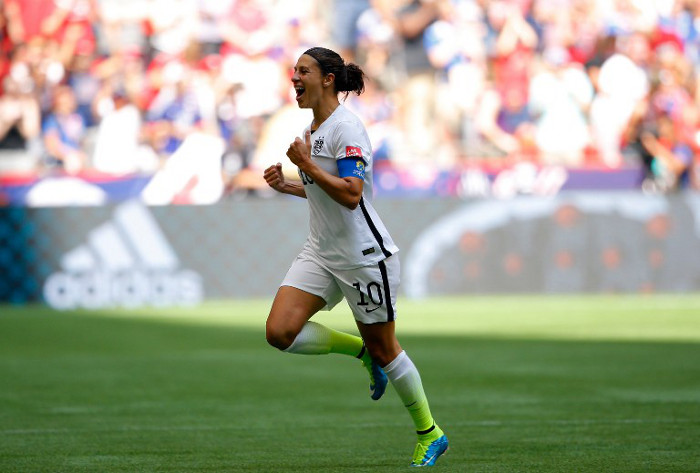 Scoring three times in a Women’s World Cup final would be a dream come true for most soccer players but not Carli Lloyd.

The American captain fired a sensational hat-trick in a 5-2 rout of Japan on Sunday then said she had dreamed of scoring four.

Lloyd fell just short of making her fantasy reality but the hat-trick, the first in a women’s World Cup final, capped an outstanding tournament by the attacking midfielder.

She celebrated a first World Cup win while adding the Golden Ball award as the tournament’s top player to a glittering resume that already includes two Olympic gold medals.

“The break we had before we met up in Jersey I was home and it was just my headphones, myself and I at the field and I’m running and I’m doing sprints and I just completely zoned out,” Lloyd recalled to reporters.

“Sounds pretty funny but that’s what it is all about.

“At the end of the day you can be physically strong, have all the tools but if your mental state isn’t good enough you can’t bring yourself to bigger and better things.

“For me I am just constantly visualising … and I was on a mission today.”

By any sporting standard, it was mission accomplished as Lloyd helped re-write the World Cup record book.

No team had ever scored more than two goals in a final but the brilliant Lloyd went one better all by herself — and within just 16 minutes.

The 32-year-old also earned a spot on television highlight shows around the globe, completing her hat-trick with an outrageous long-range goal that will be part of Women’s World Cup talk for years to come.

Gathering the ball in her own half, Lloyd spotted Japan goalkeeper Ayumi Kaihori far off her line and shot from the half-way line with the scrambling Japanese keeper only able to touch the ball on to the post and into the net.

“I did it once, I think, when I was younger on the national team in a training environment but very rarely do you just wind up and hit it.

“I think when you are feeling good mentally, physically, those are just instincts and it just happens.

“I feel like I just blacked out for the 30 minutes of that game.”

What was an American dream was also a Japanese nightmare as Lloyd struck twice in the opening five minutes.

She has established herself as public enemy number one in Japan, having also scored both goals in the United States’ 2-1 victory over the Asians in the London Olympics gold medal final four years ago.

But there were no hard feelings from Japan coach Norio Sasaki.

“Miss Lloyd always plays good against us,” said Sasaki. “In London she scored two goals, today she scored three but she is an excellent player and I really respect her and admire her.” – By Steve Keating

Image – Carli Lloyd #10 of the United States celebrates scoring the opening goal against Japan in the Fifa Women’s World Cup Canada 2015 Final at BC Place Stadium on July 5, 2015 in Vancouver, Canada. (AFP)