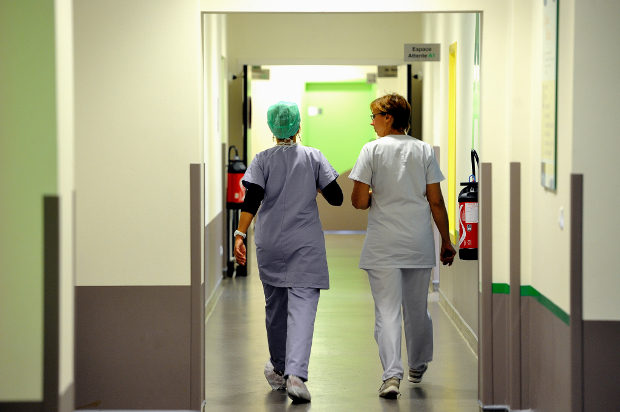 A few years ago — and no names, no pack drill, because I said nothing at the time — I had to go into hospital for a small procedure. It was a private hospital, part of one of the large chains. I would be in and out on the same day. My medical aid was paying the exorbitant fees. It was also the coldest day of the year.

I arrived 10 minutes earlier than I’d been told to be in the ward, and was hustled to my bed with annoyance because I was early. I was informed there were no blankets in the ward. The electricity over my bed didn’t work, so I had no light, no TV to watch while I waited. And it was freezing and grey and miserable.

The sister who took my medical history didn’t have a pen. Then there was great consternation because the wrong equipment had been ordered, so they couldn’t put my drip up in time. The nurses looked at me desperately. I had no remedy to offer, not being a medical supplies company. Eventually they sorted it out and I lay in my open-backed cotton theatre gown and paper panties, under a sheet or two and shivered until it was time for my operation.

After the op I was in a fair amount of pain. I was nauseous from the anaesthetic. I was still in my open-backed gown and I was still freezing. I needed to throw up, but I couldn’t call a nurse because there was no electricity to operate the buzzer, so I lay in my bed and hoped someone would check on me. Eventually when the pain and nausea were unbearable, the woman in the bed next to me woke up and I could ask her to call someone for me.

The surgeon discharged me and I asked for security to be contacted so I could retrieve my cellphone and phone my husband to fetch me. That took an hour or so. I got colder and colder. When my family arrived to fetch me, just six or so hours after I’d arrived, I was as white as the sheets I lay under — from cold and pain, I think. But finally I could put on my clothes and leave.

The bill was outrageous. As I recall I could’ve spent a couple nights in a five-star hotel — with three meals a day, a warm, comfortable bed, and every whim attended to — for the same price. And I remember being very, very angry. I’m not sure why I never complained, but I was furious at the lack of care and facilities at a hospital that was charging an absolute fortune for the privilege of lying within its hallowed walls.

This may have happened to me a few years ago, but not much has changed. I’ve had some friends in hospital recently and they complain of the same things: nurses who don’t really care, not being warm enough, and having to fork out a king’s ransom in fees. How do the private hospitals get away with delivering this kind of “service” and still make squillions in profits every year?

Sure, I didn’t die — nor did my friends — but at the price that you or your medical aid pays, surely patients should be warm and comfortable and nursing sisters should have access to ballpoint pens at the very least and know how to order a basic drip set, or what to do if someone has ordered the wrong thing.

But do you know what really terrifies me about this scenario? That all of the above, comparatively speaking, are middle-class problems. Because they pale in significance to the horror that is our state hospitals, where the majority of people in this country are forced to go for their healthcare needs. Because there, if you survive the queues, you are lucky to get a mattress on the floor, never mind a proper bed or a blanket.

And then you consider yourself lucky.