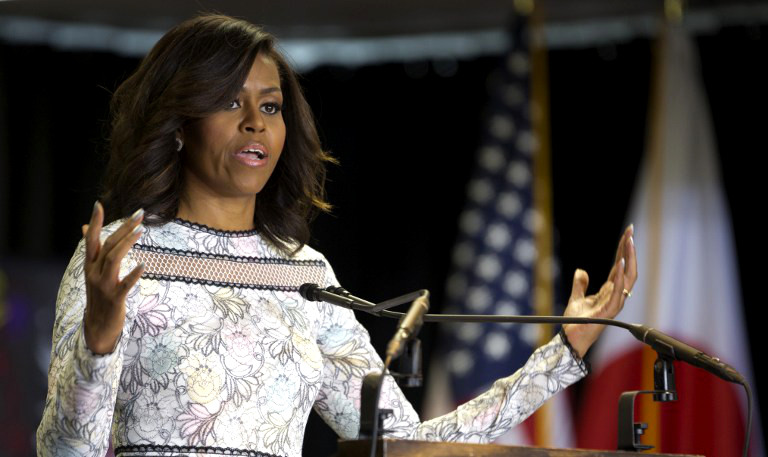 First lady Michelle Obama existed this week, so naturally the internet is very, very upset. Specifically, Obama had the gall to approach a microphone at Tuskegee University’s commencement ceremony and say, in the mildest possible terms, that racism is real, and that the eager, bright-eyed Tuskegee graduates should devote their lives to some combination of the following anti-American subterfuge techniques: voting, doing a dance, having self-esteem, becoming teachers, following their dreams, fighting the kind of structural inequalities that historically forced black luminaries to build science labs out of literal garbage, and intermittently hula hooping. Truly a vile brew of verbal witchcraft and reverse-racist skullduggery!

You can judge for yourself just how controversial the speech was. Here’s an excerpt from its climax: “I know that these little indignities are obviously nothing compared to what folks across the country are dealing with every single day – those nagging worries that you’re going to get stopped or pulled over for absolutely no reason; the fear that your job application will be overlooked because of the way your name sounds; the agony of sending your kids to schools that may no longer be separate, but are far from equal; the realisation that no matter how far you rise in life, how hard you work to be a good person, a good parent, a good citizen – for some folks, it will never be enough.”

Fortunately, the internet’s brightest (and whitest) are on the case to make sure that Obama doesn’t unravel the very fabric of America itself with her nefarious listing of easily verifiable historical facts, rigorously vetted academic studies, and relentlessly encouraging platitudes. Ride on, brave patriots! Thomas Jefferson is totally waiting to high-five you in heaven!

“Michelle Obama is a reverse racist,” one Twitter user helpfully explains. “She attacks white people & gets black people to think they’ll have a hard life no matter what. Ugh!!!” Yeah, ugh! When will black people learn to recognise REAL hardship, such as being a white woman under “attack” from incessant George Washington Carver anecdotes in a speech that she voluntarily sought out and hate-watched!?

“I can not believe the negative commencement speech that you gave at Tuskegee,” scolded another. “Not uplifting at all.” Yo, goateed white dude named Kevin or something, maybe the commencement speech about black people’s lived experiences delivered at the historically black college that you did not attend wasn’t intended to lift YOU up? Maybe not everything is for Kevin?

Others described the speech as “racist against white people,” “ghetto,” “un-American,” “uppity,” and “a disgusting display of race baiting and division.” Rush Limbaugh said that Obama “ played the race card”, while Glenn Beck delivered one of his rambling monologues about how Booker T Washington totally would have declared racism over in 1968 and only “Harvard know-it-alls” are keeping that silly myth alive.

Black people being disproportionately and spuriously detained by police; candidates with “black”-sounding names being passed over for jobs; black families being trapped in cycles of poverty by red-lining and mass incarceration and forced to send their children to unsafe, impoverished schools – whatever your feelings about our current first lady, these are not opinions. They are facts. Acknowledging them should not be radical. They are simply true, and you either care about them or you don’t, and this is not up for discussion.

And as for whether or not you can ever “be enough” for some folks, just look at the internet’s response to an erudite, beautiful, Ivy League-educated black lawyer-turned-first-lady-of-the-United-States stating (almost understating, even) the undeniable fact that racism still exists: “boo hoo.you can get the fuck out anytime you want cunt. Quit whining about how much this country hates you. YOU DON’T MATTER.”

Certain white people, it seems, are so fragile when it comes to discussions of race, they’re not even capable of absorbing and accepting basic, observable truths. Forget nuance. Forget dialogue. The depth of white denial – of what’s happening right in front of us, and has been happening for centuries – is nauseating. A friend of mine, who grew up a sharecropper on a plantation in the deep south, put it to me the other day: “I’ll never understand it. Everything that black folks have put up with and swallowed over the years – and white people are mad at us? Scared of us?”

Here’s more from the first lady: “And all of that is going to be a heavy burden to carry. It can feel isolating. It can make you feel like your life somehow doesn’t matter – that you’re like the invisible man that Tuskegee grad Ralph Ellison wrote about all those years ago. And as we’ve seen over the past few years, those feelings are real. They’re rooted in decades of structural challenges that have made too many folks feel frustrated and invisible. And those feelings are playing out in communities like Baltimore and Ferguson and so many others across this country.”

Obviously Michelle Obama can do whatever she wants with the remainder of her husband’s term (a good portion of her speech emphasises as much), but I hope this is a harbinger of things to come. How impactful would it be if every speech from now until the end of the Obama presidency used this as a baseline? – By Lindy West