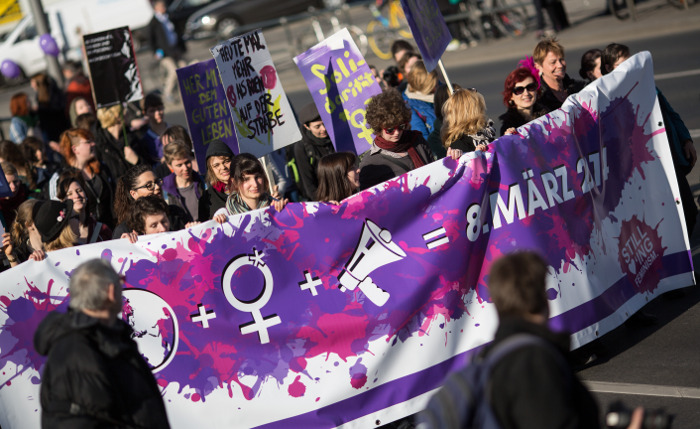 Recent debate has focused on whether infighting distracts from fighting inequality. But haven’t feminists always argued about priorities?

Should we tolerate debate within feminism’s ranks? Undebatable! But it’s not so simple: women are socialised to avoid conflict; when we do differ, especially on politics and in public, it’s still tediously labelled a “catfight”. Disagreement seems reserved for the guys, who trot along the spectrum from “frank and candid dissent” up through nuclear war with entitled ease. Nevertheless, women (even feminists) fortunately don’t march in lock-step, so trying to smother debate is foolish – and impossible.

Healthy argument is why I’m a feminist. I was a New Left “revolutionary”, patronisingly ready to indoctrinate my initial women’s group with Marxism. Happily, they got to me first, in close-to-the-bone passionate arguments about men, sex, intimate violence, unpaid labour, and how – ahem – “the personal is political”.

But I have standards, seasoned over 40 years of activism. I don’t waste time debating patriarchy’s defenders. I don’t practise or tolerate personal trashing. I don’t engage with faux feminists who, whether under the aegis of religious fiat or sexual libertarianism, refuse to understand that all women deserve full reproductive rights, all women deserve to love whomever they choose, all women deserve freedom from violence, poverty and illiteracy, that the buying and selling of any human being is slavery. Feminism is for all women and girls, not a privileged few or one ethnicity, religion, age, sexual preference, ability, region or hemisphere. Women born and raised on this fragile planet have more uniting us than dividing us – and it’s the job of feminists to help us realise that. Those are my standards. Otherwise, bring on dissent!

Charlotte Raven: From critics to collaborators

I am terrified of the online commentariat in general, and the online feminist commentariat in particular. Like most people I remember the roastings more than the bouquets. On the launch day of our feminist magazine we were slated for publishing a piece about sterilisation in our taboo corner. Since then we have been shouted at by activists for being middle class, by essential feminists for having a trans woman on our editorial board, and by the high-heeled for condemning femininity in general, and their “fuck-me shoes” in particular. I understand where they’re coming from: I was most angry when I didn’t have a public platform. Luckily, I didn’t blog or tweet during my wilderness years or I would have wasted many hours firing broadsides at better-known feminists.

We wondered whether some of our critics may have felt excluded and perceived us as cliquey. Other longtime activists were understandably proprietorial about feminism and viewed Feminist Times as an occupying force. We invited them to come and meet us. Arriving late to a meeting, I was amazed to find one of the Twitter hardwomen talking poignantly about feeling thwarted. They were also different in person; ranting Ms Hydes were transformed into reasonable Dr Jekylls. They did want a platform, and several of our detractors have become regular contributors. The tea offensive turned critics into collaborators. I would recommend it to other feminist organisations. Never again should people have to use FoI requests to find out what scientists have been up to, let alone have them refused.

Charlotte Raven is the editor of Feminist Times

Online exchanges are often nasty, whether about feminism or anything else, but they allow those whose voices may not otherwise have been heard to express themselves. These debates represent a struggle for space within a movement that has for too long excluded or marginalised so many of us. And when the marginalised speak up, those who have dominated the scene always feel threatened.

This was how it was when the largely white and middle-class movement of the late 70s and 80s was challenged by us in the Organisation of Women of Asian and African Descent. When we spoke about the way race shaped gender, many white women would cry and say our words were hurtful. When we spoke about our painful experiences of racism within the women’s movement, others would become angry and abusive. Terms like “privilege” are not nuanced and why should they be? As for intersectionality – when one inequality overlaps with others – it is a sign of how much debates have moved to the right that its relevance is even being debated. Poverty is growing, racist violence has escalated, so has surveillance. For many of us – black, Muslim, trans, lesbian, queer and disabled – police harassment is commonplace and specialist refuges and services for women facing violence built over decades by black feminists are being closed down. Can anyone honestly say that these things do not represent or shape experiences of gender for a vast number of women? And yet the mainstream feminist movement says little (and does less) about these issues. This status quo needs challenging – good luck to the voices who do so.

Amrit Wilson is a writer and activist on race and gender, and south Asian politics

It was Harriet Harman, feminist and civil liberties activist, who announced as frontbench spokeswoman of New Labour that one-parent benefit was to be abolished. It was her sister frontbencher Yvette Cooper who announced welfare reform, taking income support from – again – single mothers, including those fleeing domestic violence. No prominent feminist has joined or supported protests by women with disabilities, or women of colour, or homeless women. Polly Toynbee’s defence of the welfare state has not been supported. Those of us trying to change the world for women, and therefore for everyone, don’t expect any help from the Daily Mail, so we don’t complain when we don’t get it. But we do expect it, or at least we used to, from feminists who claim that women, especially those of us under attack, are their priority. When they disappoint, we’re furious. Ambition seems to be their priority, and their sisterhood reserved for women like themselves.

One of the fiercest debates provoked by the founding of the Wages for Housework Campaign in the 1970s was on welfare. We said it was single mothers’ right to payment by the state for their caring work. The refusal of feminists to acknowledge that work enabled Tony Blair to call mothers “workless” and made way for welfare reform’s definition of a good mother: she goes out to a job, even below the minimum wage, with whatever childcare she can afford. We knew what was at stake and we put a marker: for grassroots women, for caring, for a living wage.

Just as fierce was the attack on women making a living through sex work. And when police recently raided flats in Soho, London, where women were working safely, and dragged some into the street in their underwear, there was not a word from known feminists. There is a new division among women, between the 13% who are professionals, managers, etc, and the rest of us down at the grassroots. They are at best an instrument of the other side; at worst they are the other side.

Selma James is founder of the Wages for Housework Campaign

The current debates about intersectionality recall, if not repeat, many of the battles fought between black and Asian feminists (along with their white anti-racist compañeras) and white feminists who felt the struggle was being diverted by the call to pay attention to the inseparability of misogyny, racism, homophobia and class. While there remains much to do to expand an intersectional understanding of the conditions that determine what it means to be a woman and who may be included, without those earlier moments of infighting, feminism today would be all the poorer.

Infighting is either a sign of collective suicide or of a robust reaching out toward greater understanding and inclusion. The distinction turns on whether the aim is to foreclose difference of opinion and assimilate it into the sameness of a sterile and phantasied “we”, or to foster a desire for connection through coalition across difference. Deciding which way to go is always difficult but nevertheless necessary, to challenge feminism’s complicity with racism.

Infighting may be dangerous, but in these neoliberal times – when new inequalities overlay old ones, when the diversification of gender increases, and yet the visions for alternative modes of connection multiply – to ignore the challenges of infighting is equally, if not more, dangerous. So let the work of making feminism continue but let it do so in passionate conversation.

I have participated in many international, regional and local women’s conferences over the past 40 years and I have found that there are many different feminisms, not one movement or one conception of women’s liberation.

There have always been conflicts and disagreements between women belonging to the upper-middle classes in the global west or north and the majority of women in the south or east who belong to working classes. For example, working-class women in the US supported African women when others called us “women of the third world” and we were not happy with that term. Even within countries there have always been different feminisms, and it is really a matter of understanding the links between oppression by gender, by race, class and religion.

In my writings and activities I link all these together, because there is no separation in history between class (slavery, feudalism, capitalism) and gender or patriarchal oppressions. Women are half the country and they cannot be liberated in a country that is dependent on others. Women from Africa understand that we are oppressed by colonialism, and by dictatorship, as well as by gender.

But from these arguments we have reached many agreements: for example, linking gender to class, which was particularly useful for black women in the US. Then politics interfered and women who talked about class were labelled as Marxists. There have always been disagreements, but they can be fruitful. I remember visiting Greenham Common in the 1980s and talking to some women who supported Margaret Thatcher. They said to me, “We should not be divided by class”, and of course we shouldn’t, but nor should we be divided by economic exploitation. Some women are more patriarchal than some men, depending on their level of awareness.

I have a contemporary disagreement too, with the Femen group who bear their breasts in protest, because I believe that veiling and nakedness are two sides of the same coin: woman is just a body to be covered for religious reasons, or to be naked for the free market and economic profit of the media. These women argue that they are taking ownership of their bodies, but I argue that I take control of my body by using it to be independent. And men are never obliged to take off their clothes to show that they are independent.

Nawal El Saadawi is an Egyptian author and activist