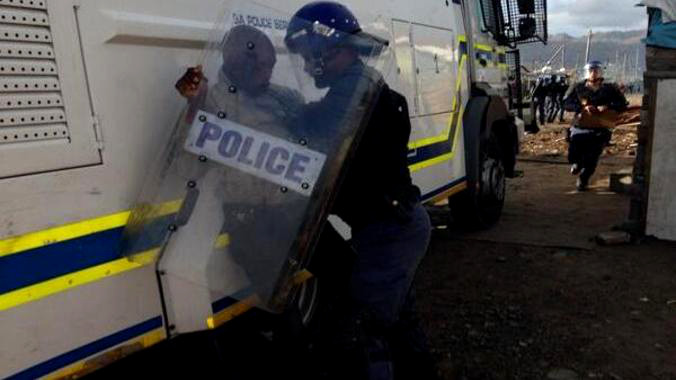 It’s a sobering thing watching people who possess very little having even that taken away from them. Between Marikana and the scenes we’ve witnessed at Lwandle, you’d be forgiven for thinking the Nats were in charge again. We’re still forcibly evicting the poor from their homes in this day and age?

But what’s even more disturbing to me is all the finger-pointing and blaming I’ve seen aimed, in particular, at those who’ve been evicted from Lwandle. Yes, the victims. The poor families left without homes in the midst of a Cape winter.

Some people have been very quick to point out that the evictees are “not entirely blameless”. That they’re occupying the land illegally. And it makes me quite ill.

Yes, it’s an informal settlement, or less euphemistically, a squatter camp. These are people who are living on land that doesn’t belong to them. So what? Yes, you heard me. So what?

Have we no humanity left? Are we so concerned with whether or not they are legal that we argue about whose fault it is rather than do something to solve the problem?

Because, in all honesty, I can’t see that anyone chooses to illegally occupy land and live in a place where there’s no water, or electricity or sanitation. Where the wind howls through holes in a tin and cardboard shelter that’s held together with spit, glue and a healthy dollop of prayer to whichever gods are listening. It can only be because they’ve run out of options.

People are poor and dispossessed and desperate and there are simply not enough jobs and proper homes to go around. And those of us who have employment and shelter need to remember how to be human. To remember that it could just as easily be us in the same position had we been born into different circumstances, or had different opportunities.

I wish our kneejerk reaction would be to find a way to contribute, even in some small way, instead of pointing fingers and defaulting to “it’s their own fault” or “it’s not my problem”. When I see those reactions, I’m always saddened that there is so little compassion in so many people.

I also wish the reaction from politicians had been to mobilise the haves to help out the have-nots. That they had said: “Let’s find decent shelter for these families in the midst of a freezing winter and squabble about responsibilities and faults later.”

I suppose a girl can dream.