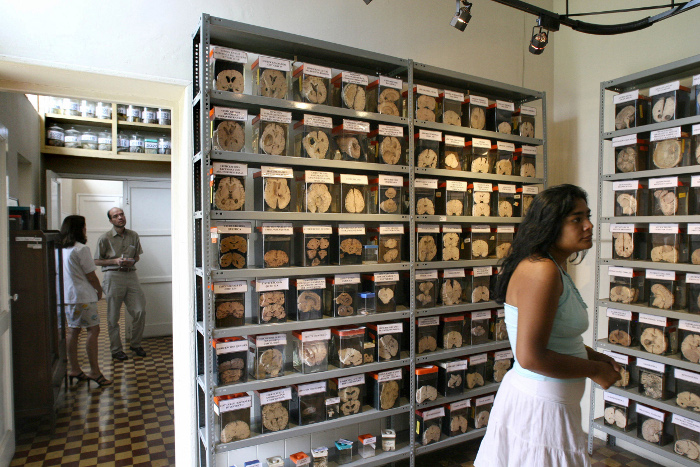 If men are from Mars and women are from Venus, no one told the organ that matters most. There is no sharp division between male and female brains, according to researchers who found that we are all a mixture instead.

Scientists analysed brain scans of more than 1 400 men and women and found that while some features are more common in one sex than the other, each person’s brain has a unique “mosaic” of these features, as well as others seen commonly in both.

“What we show is that there are multiple ways to be male and female, there is not one way, and most of these ways are completely overlapping,” said Daphna Joel, a psychology professor who led the study at Tel-Aviv University.

The researchers drew on MRI scans to look at a host of brain characteristics, from the amount of grey and white matter to the strengths of connections in the brain. Much of the analysis focused on the sizes of different brain parts. While many regions showed a huge overlap between the sexes, the researchers focused on the parts showing the greatest differences, with the least overlap between women and men.

Joel and her team next looked to see how often the form of each of these regions within a single brain was consistently on the end of the distribution where females were more prevalent than males (the “female-end”) or consistently at the other “male-end”. Across the four different sources of brain scans they studied, the scientists found the percentage of “internally consistent brains”, in which all regions were at the male end or all at the female end, varied from zero to 8%, while those with both male-end and female-end features ranged from 23% to 53%.

“We show there are differences, but brains do not come in male and female forms. The differences you see are differences between averages. Each one of us is a unique mosaic,” Joel said. Her study appears in the journal Proceedings of the National Academy of Sciences.

“Sex affects the brain but how it affects the brain depends on other factors. The effects of sex can be different and even opposite under different conditions. This is why you can be highly masculine on one feature but highly feminine on another feature,” she added.

According to Joel, the study should prompt people, and society at large, to think far beyond a person’s sex. “We have to treat each person according to what he or she is and not according to the form of their genitals,” she said.

Heidi Johansen-Berg, professor of cognitive neuroscience at Oxford University, said the results are interesting, but not surprising. “The main point they’re making is that unlike genitalia, you can’t perfectly categorise brains as being either male or female, but I’m not sure anybody would have thought you could,” she said.

“There are very few people at the male / female extreme ends on any feature, and, where we are on the male-female axis will vary for different features. We are all a mixture,” she said.

“Having said that,” she adds, “Other papers have shown that, if you look across many different brains and find these characteristics, then, given a new brain you can predict with some degree of certainty whether it’s likely to be male or female.”

Michael Bloomfield, a psychiatrist at University College London, said that while the study found no evidence for a female or male type of brain, we need a more nuanced understanding of similarities and differences in brain structure between the sexes.

“This is important, as many mental illnesses are more common in one sex over the other and we still don’t understand why this is. Understanding this could well help us understand some of the biological mechanisms that give rise to these illnesses, which could then enable the development of better targeted treatments. Important questions remain, such as whether the sexes tend to have differences in brain chemistry and how this may relate to brain function.

“If the results of this study are replicated and related to thinking and behaviour, this study would not support the view that men are from Mars and women are from Venus. Instead, they lend support to ideas proposed by the ancient Greek philosopher Plato and advanced by the Swiss psychiatrist Carl Jung, that our minds may be part male, part female … whatever that means,” he said.

Image – A visitor watches anatomical pieces on display at the Museum of the Brain in Lima, Peru. (AFP)