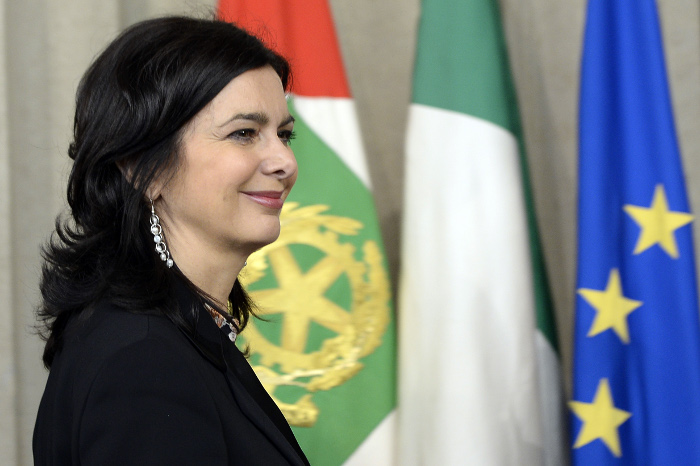 Beaming into the cameras as two middle-aged male presenters placed a silver crown on her impeccably glossy hair, 19-year-old Giulia Arena looked delighted to have emerged victorious from the 2013 Miss Italia contest. To the emotive strains of Over The Rainbow, and with the massed ranks of failed contestants behind her in skin-tight silver mini-dresses, the Sicilian law student still bore her number tag, 09, as she smiled into the crowd.

According to her contestant’s biography, Arena is “1.70m tall, with fair chestnut-brown hair and green eyes”. She has a line of Dante tattooed on her chest.

More than 900,000 people tuned in to watch her four-hour-long triumph over 63 other young women at the end of last month.

Anna Maria Tarantola, however, was not among them. As president of the state broadcaster, RAI, she had taken the decision, along with other directors, to scrap Miss Italia from the autumn schedules and ensure that, for the first time in 25 years, the show was no longer considered a part of the public service remit. Arena’s victory went out courtesy of the private television network La7 and got an audience share of just 5.5%.

RAI’s “boycott” of the show that launched Sophia Loren in 1950 was supported by many but denounced furiously by those regarding the annual contest as a beloved piece of Italian culture.

Tarantola, who until last year was deputy director general of the Bank of Italy, was declared one of a cabal of “fanatical feminists” and compared to Mohamed Morsi, Egypt’s ousted president, for her supposedly moralising tendencies.

But she does not have any regrets. “It was not considered – and I was in full agreement on this – a programme that valued female talent,” she says, sitting in RAI’s headquarters in Rome. “There is absolutely no need to demonise beauty. Beauty is a great thing, a positive thing, but it must not be the sole reason for which a woman has a chance to make a name for herself.”

She adds: “A woman must make a name for herself because of her talent, her ability. She must have the opportunity to express her capabilities … Public TV should not, in my opinion, be sending out the message, ‘look … you can become someone if you’re beautiful’. No, you can become someone if you are committed, know how to value [your] own talent, know how to highlight it, and cultivate it. And then, if you’re beautiful, all the better.”

Tarantola, 68, says the decision to drop Miss Italia was financially, as well as ethically, motivated. The programme was an old format, she says, which had lost viewers over the years.

But, in a country notorious for the scantily clad showgirls who came to populate television screens during Silvio Berlusconi’s era of huge political and media power, the symbolic nature of the move was clear.

Laura Boldrini, speaker of the lower house of parliament, who has hit out at the way in which women are often depicted as “mute, and sometimes undressed” on television, lauded the rejection of the show as “a modern and civil choice”. Twenty-eight years after the BBC stopped broadcasting Miss Great Britain for being an anachronism verging on the offensive, RAI too, under Tarantola, wants to send a message that Italian television needs to start cleaning up its act.

A woman of steely gaze but hearty laugh, Tarantola spent 41 years at the Bank of Italy after completing a master’s degree at the London School of Economics. During those decades she emerged as an advocate for positive discrimination in order to get more women into decision-making roles and combat Italy’s relatively low level of female employment.

When, last summer, she was appointed to RAI by Mario Monti, the technocratic former prime minister who succeeded Berlusconi, she set about trying to make the broadcaster more respectful to women. Berlusconi, meanwhile, owner of Italy’s three biggest private television channels, sought solace in the arms of Francesca Pascale, a former television showgirl famed for co-singing a ditty with the memorable catchphrase: “If you show a bit of thigh, the ratings go up.”

As a powerful woman who prefers to keep her clothes on, Tarantola has perhaps inevitably been compared in some quarters to Margaret Thatcher and, for good measure, the Queen. She doesn’t want to comment on the effect that 77-year-old Berlusconi has had on the Italian television industry. But she says she is totally convinced that, as a public broadcaster, RAI has an ethical responsibility to start showing women in a more realistic light.

“Perhaps here, even if things are changing, which they are, the prevailing image of women [on television] is as housewives, mothers … or as showgirls, that kind of thing,” she says.

“From what I have seen when I’ve been in countries [such as Britain, Germany and Scandinavian nations], the role of women who also work, are  also professionals and people who play an important role in society, has been consolidated.”

To formalise this desire for a more equality-focused approach, RAI adopted a set of guidelines on gender last month that aim, among other things, to open up more top jobs to women inside the corporation and to reflect equality through editorial output.

The “company policy on gender matters” calls on RAI journalists and executives to guarantee respect to women “through a dignified, real, non-stereotypical and non-discriminatory portrayal, which reflects the multiplicity of roles which [they] play in the social, cultural and political life of the country”.

In practical terms, Tarantola says, the policy means, for instance, boosting the number of female experts who are brought on to shows, and seriously rethinking the language that news journalists use to report on issues such as femicide – the gender-based killing of women – the prevalence of which in Italy has been linked by some to the negative way in which women are portrayed in the media and popular culture.

Fiction, she believes, can also play a crucial role in changing mentality. A drama that tackles domestic violence is in production. “Fiction is a powerful tool because it touches people’s emotions,” she says. “And so representing female figures who are capable and competent, and who are playing important roles in society at the same time as managing to be mothers and wives – thanks to the support of public services, this is a good message.” – By Lizzy Davies © Guardian News and Media 2013