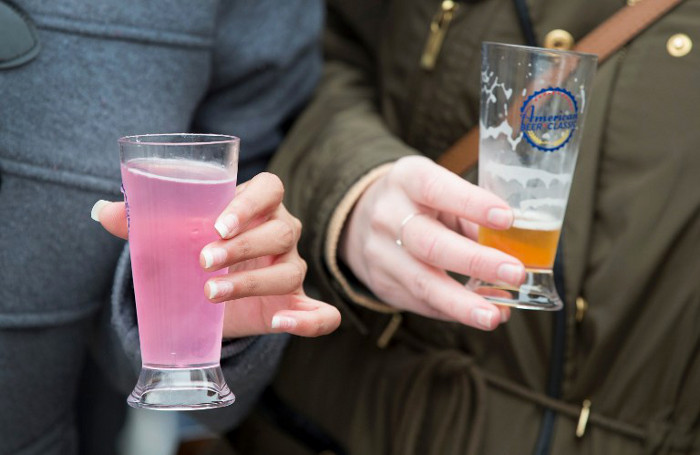 On Tuesday night, The Way Station, a bar in the Prospects Heights neighbourhood of Brooklyn, gave a whole new meaning to ladies’ night. This 7 July – 7/7 – the local watering hole was drawing attention to the gender pay gap by charging women just 77% of their bar tab. Why 77%? Because on average, US women make about 77 to 78 cents for every dollar that men earn.

“I have three sisters. The majority of my staff and friends are women,” Andy Heidel, owner of The Way Station, said. “I thought this would be a great way to even the playing field even if it was for one night only.”

Cheyenne and Aliyah, two 21-year-olds who did not want to give their last names, made it out for the occasion.

Aliyah, a senior at John Jay college who hopes to be a New York police officer, said the gender pay gap is something she worries about when thinking about her post-college experience.

Both Cheyenne and Aliyah know that they have one more thing working against them: they are black. Women of colour earn 64 cents for every $1 earned by men.

“My father as a black man also probably makes less than his white colleagues,” said Aliyah.

“This is about equality. This is America,” said Cheyenne. “We should get equal pay.”

Just a few feet away, two young men were having similar conversation. According to Heidel, that was the entire point of Tuesday’s deal: to get people talking.

Heidel spent the evening working as bartender and busboy, stocking the bar with alcohol and glassware, slinging drinks, and collecting the empties.

The bar started to get busy at 6pm and was still full five hours later. There were about 90 people in the bar, with barely any standing room left for newcomers.

“This is much bigger than I expected,” Heidel told the Guardian, while taking a break outside. After he realised that he might have to turn people away, Heidel asked 706 bar, a bar across the street, if they would join the cause. “I wanted to be able to send them someplace where they would be treated with respect and be able to enjoy the same discount.”

The bar draws enough attention on its own. Known as Brooklyn’s “Doctor Who” bar by most due to its Tardis bathroom, it sees its share of out-of-town visitors and devoted regulars.

One young man stood outside eyeing the crowd. “Well it’s about three layers deep, but you should go get your 77% bar tab,” he told his female companion, smiling. “I want you to get your damned reward, your reparations. “As they stepped closer to the entrance, a third member of their party, another young man, said: “I love women but I am afraid of noise.” “It’s women’s noise!” said the female, leading them in towards the happy chatter.

“I feel claustrophobic just looking at it,” said a young woman as her group of friends approached. Taking a deep breath, she and her friends dived into the crowd.

Heidel kept popping in and out of the crowd. Standing outside, he shook hands with those leaving, thanking them for coming out. Regulars slapped his back, congratulating him on the night’s success.

“You touched a nerve,” one of the regulars told him.

Heidel said that he was happy to start the dialogue about the gender pay gap, pointing out that the women’s soccer team that won the Women’s World Cup this weekend was paid less than their male counterparts. Not everyone was thrilled with The Way Station’s version of the ladies’ night, with some men’s rights activists saying the deal discriminated against men. To those who were complaining about price discrimination against men and threatening to boycott the bar, Heidel had a ready response: good riddance.

“Men are already complaining on the Men’s Rights Reddit and other places saying I am discriminating,” Heidel said. “For those men complaining about it, those are not the type of people I want as customers so this promotion is helping to weed out those who do not want to treat women with respect.”

The New York City department of consumer affairs did not respond to a request for comment as to whether this would constitute price discrimination in New York.

“This is weeding out the assholes and it’s working,” said Heidel. “It’s 85% women in there and that’s fantastic.”

Not even five minutes after he said that, three men passed by. One shook his head, saying: “No way am I going into that bar.”

The US census bureau found that in 2013 women were making $10 800 less a year than men. This means, they were earning only 78 cents for every dollar a man earns. In 2012, women earned 77 cents to every dollar men did.

Not everyone is ready to accept these numbers, however. Some critics of the “77 cents for every $1” figure insist that the wage disparity between the genders stems from women’s choice of careers – for example, women are more likely to pursue degrees in education, social work, healthcare, arts and communications, while men are more likely to study computer science and engineering.

“The stats I have researched are based on same jobs held by women and men,” he said. “I’m sure if you took national average, all the male CEOs would skew the numbers even more.”

Heidel hopes to make the event an annual thing.

“Hopefully next year we can do this on 8/5, instead of 7/7,” he said, before diving back into the happy crowd. – By Jana Kasperkevic in New York