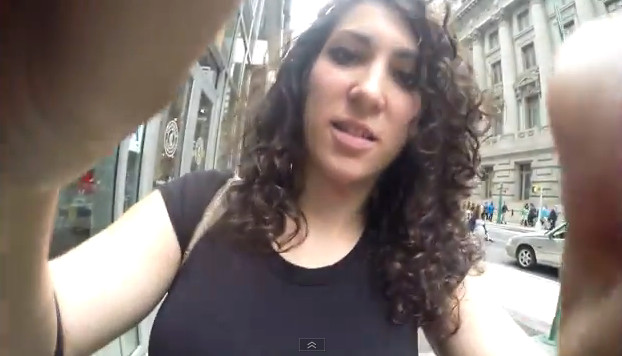 A video that shows a woman being pestered by men on the streets of New York has gone viral, sparking renewed debate about harassment endured by women and minority groups.

The two-minute video shows actress Shoshana B Roberts walking silently in jeans and a T-shirt through Manhattan as man after man greets her with remarks such as “hey, baby” or “hey, beautiful”.

When she does not respond, she is admonished for being rude with comments such as “smile” or “somebody’s acknowledging you for being beautiful. You should say thank you more”.

Called “10 Hours of Walking in NYC as a Woman,” the video has been viewed 14 million times since being uploaded to YouTube on Tuesday. It was produced for Hollaback! which works to end street harassment endured by women and minority groups.

At one point the video shows a man who walked alongside Roberts for five minutes without saying a word, causing her clear alarm.

The organisers said she encountered more than 100 instances of verbal street harassment within 10 hours and endured countless other winks and whistles.

As views of the video skyrocketed, Roberts said she had received violent threats online.

“The majority of the reactions by email were positive but unfortunately a few ones were negative, involving hurting me, killing me. I’m going to go to the police because I don’t feel safe,” she said.

Hollaback! says women, people of colour, gays, lesbians and transgender people are particularly susceptible to street harassment, which reminds victims that they are vulnerable to assault.

Rob Bliss filmed the video from a camera hidden in his backpack as he walked in front of Roberts.

He wanted to show men “what street harassment looks like in plain broad daylight, how it makes people feel and leave it out there,” he said.

“For women, I wanted to empower them a bit and talk about their own personal experiences. A lot of the time street harassment is something they can’t remove themselves from.”

“You can very quickly feel objectified and it’s ugly,” he added.

“Not a day goes by when I don’t experience this.”

Image – Screengrab from the video