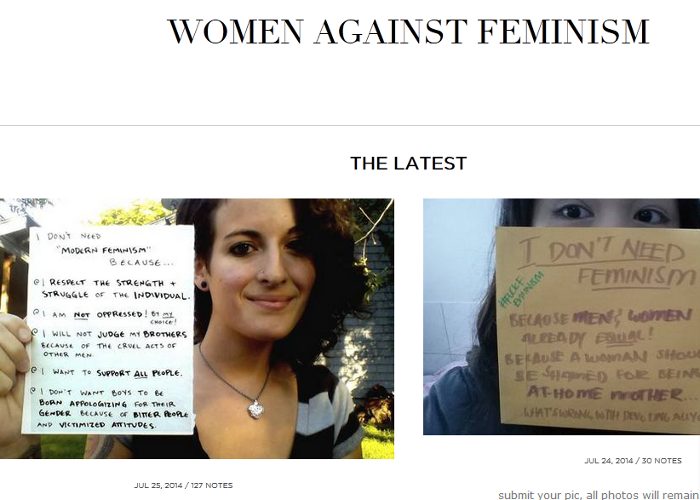 “I don’t need feminism because I can hold my own beliefs without an army of angry vagina’s backing me.”

Now that paints a picture if ever I saw one! I can see it now, the scene unfolding in front of my eyes in slow motion. A woman with her fist in the air saying “Yes we can!” and a large army of snapping, angry vaginas behind her. Egging her on. Occasionally opening their lips to yell in solidarity. All those angry vaginas!

I think this woman’s post may unwittingly be the plot to the next big Hollywood horror movie or critical art house film only to rival that of the Human Centipede or The Item. The catch phrase could be something along these lines “Vaginas no longer doing it for themselves but angry and ready for vengeance!” I mean we have absolutely taken vampire and werewolf dramas as far as they will ever go (Matt? Damon?) but maybe, just maybe a film about angry vaginas could really get tongues wagging.

I had heard murmurs of women against feminism and I had seen some images like the one above and got into a habit of shrugging them off as mere silliness. But such sentiments are gaining traction — maybe not traction but visibility. You see there has always been resistance to feminism. Anything that resists the status quo is scary and weird and therefore must be bad.

Before I started studying gender studies I made an effort to ensure that everyone was aware that I was not a feminist but that I believed women should have the same rights as men. Are you seeing the problem with this statement? Somehow at my core I identified with what feminism stood for (equality) but refused to label myself as a feminist. Was I maybe leagues ahead of my education level and on the verge of deconstructing feminism by refusing to be labelled or was I actually reacting to feminism’s bad PR.

There have been a couple of good articles that intriguingly poke holes in the arguments made by these women against feminism by pointing out some of their obvious benefits like being able to work or have the right to vote (needless to say that these are rights that are not yet obtained for all women across the world). But many of the women also cite feminism as bad for not allowing them to be stay-at-home mothers and for discriminating against men.

These are pretty weak arguments. Firstly, feminism fought for women to have the option of not only having to work from home (because that is what being a stay-at-home mom is) but the current economic structure of the world is what makes you feel as though you are not allowed to. Most middle-class families could not wing it off one salary alone. That’s capitalism’s fault, not feminism. But hey, who’s pointing fingers right? Because without the capitalist drive for cheaper (yes cheaper) labour how far would women’s right to work have gone?

Feminism discriminates against men? Nope, not the case. Yes you get some radical feminists who believe that semen is evil and we should find ways of procreating without men (another novel film idea) but as with everything you get extremists. Most feminists are fighting for equality and while all men are not raging chauvinists hell-bent on hurting women in some way or other, they do tend to benefit from their maleness. This is what Raewyn Connell calls “patriarchal dividend”. What this means is that even though an individual man may not be against women (whatever that means?) he is still likely to benefit from being a man. He is, without opening is mouth, assumed to have certain innate capabilities such as strength and rationality, which in most situations are favoured over what women are assumed to have (weakness and emotions).

It is one of the reasons why women continue to be told at work that they aren’t going to be promoted because the powers that be believe they are mothers first, then workers, whereas men are workers first (and their families are invisible). This is another debate and maybe one for a future entry.

OK, so the arguments being made by these women are easily dispelled. Or at least so I believe. Much of what they are saying, like “I don’t need feminism: freedom and equality has no gender, and shouldn’t have one. As long as no harm comes to one another, people deserve to live their lives freely and equally. No strings attached” could be a mantra for what feminism is.

So yes, while I think that those who are posting on women against feminism are misguided about what feminism actually is I also believe that feminists like myself need to start pondering the bad PR that feminism has and why it continues to be so misunderstood. Why are they gaining traction now? Is it, like one blogger suggested merely a phase? Or is it something more sinister, a discursive backlash against a movement that is only ever portrayed in its most extreme and violent forms?

Could this be the end of feminism?

I doubt it because the fact that women are calling other women whores and angry vaginas illustrates just how much work still needs to be done not only in ensuring that all women, not just women from the west, have equal access to political rights but that women who have achieved even the most basic of rights (like the right to vote) also learn to value their bodies and those of others. Because at the end of the day when you feel you are being discriminated against or denied your fair wage simply because you have a vagina you may very well wish you had a group of vaginas backing you, angry or otherwise.