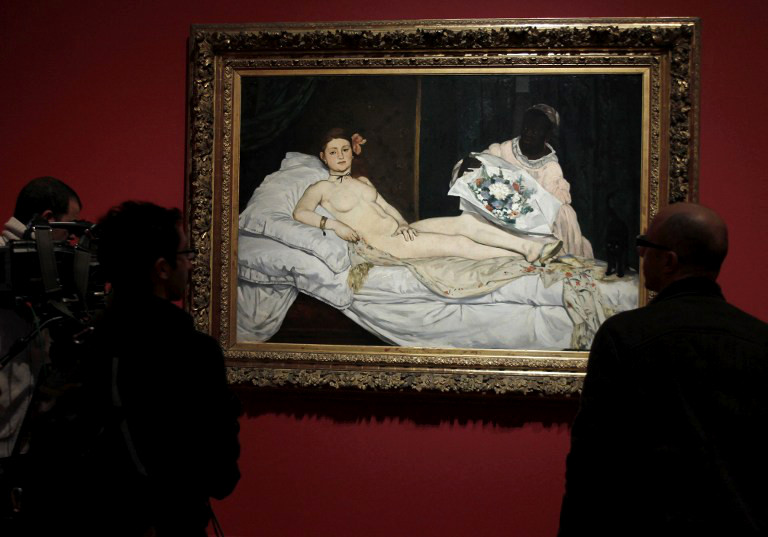 The Musée d’Orsay in Paris was wrong to call in police when performance artist Deborah de Robertis posed nude next to Manet’s Olympia, a painting often seen as a depiction of a naked prostitute.

The museum may have cloaked itself in the law but morally it stands quite naked. This is a piece of prudery more worthy of Victorian England than Edouard Manet’s France. What would the novelist Emile Zola, whose portrait by Manet also hangs in the Orsay, and who was writing explicitly and honestly about “the human animal” at a time when Victorians were putting fig leaves on statues, have said about such absurd hypocrisy?

France has a long history of frankness about love and sex – it is famous for it – so the Musée d’Orsay needs to reconsider its apparent double standard when it comes to nudity. It’s fine for women to be naked there, apparently, if they were painted that way by dead white males, but outrageous for a woman artist to appear nude on her own terms, by her own volition, in this museum.

Let’s get this all out into the open. The Musée d’Orsay holds the world’s greatest collection of 19th-century art. It is also home to some of the most outrageous nudes ever painted. When Manet created Olympia in 1863 he set out to parody the revered nudes of Renaissance art by clearly implying that, far from being a goddess or nymph, his model is a contemporary courtesan. Just look at her tight black necklace, erotically suggestive cat and that bunch of flowers, sent by some helpless admirer.

In fact, this is all a teasing fiction created by Manet. Olympia is not a painting of an actual courtesan or prostitute but of the artist’s regular model Victorine Meurent. Manet’s calculated outrage worked and when Olympia was shown at the Paris Salon it was seen by scandalised audiences as a shockingly matter-of-fact painting of a sex worker. Yet it’s not even the most provocative painting in the Musée d’Orsay. That is Gustave Courbet’s The Origin of the World.

Deborah de Robertis previously got into trouble for revealing her own vagina next to this sensational work that for most of its life was hidden in the private collections of some of the most dirty-minded intellectuals in Paris. The museum also owns Paul Cézanne’s A Modern Olympia – a painting unequivocally concerned with prostitution, depicting Cézanne himself as a client in a brothel. This no-nonsense acceptance of the facts of life was at the very heart of what made Paris the city of modern art’s birth.

From Toulouse-Lautrec’s intimate and sensitive portrayals of his prostitute friends to Degas’ desolate painting of a woman drinking absinthe in a cafe, contemplating her sad life, the Musée d’Orsay chronicles a secret history of sex in the 19th-century city. Deborah de Robertis is only drawing attention to what is there already there.

Sex and art are inseparable at this sensual museum, just as they were inseparable in the golden age of Paris. It really is a nonsense to pretend that real nudity is somehow a surprise in a place so full of painterly lust. And at least she gave the museum’s photo-snapping crowds something new to wave a selfie stick at. – By Jonathan Jones

Image – People look at the painting “Olympia” made on 1868 by French impressionist artist Edouard Manet during the press visit of the exhibition “Manet, inventeur du moderne” (Manet, founder of modern) on April 4, 2011 at the musee d’Orsay in Paris. (AFP / Francois Guillot)