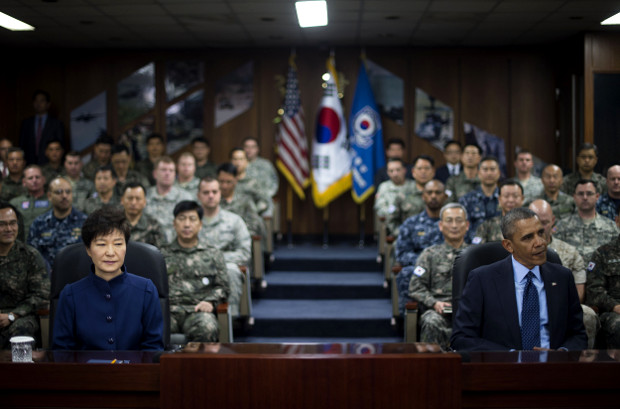 North Korea has launched a vitriolic attack on the South Korean president, comparing her to “crafty prostitute” in thrall to her “pimp” Barack Obama.

It also described Park Geun-hye as America’s “comfort woman”, a reference likely to enrage many in South Korea, where anger still runs high over the plight of thousands of women who were enslaved in Japanese military brothels during the second world war.

The comments were issued on Sunday by the Committee for the Peaceful Reunification of Korea (CPRK), which handles cross-border affairs, following the US president’s two-day visit to Seoul. He arrived in Malaysia on Sunday for the penultimate stop on his four-nation tour of Asia.

While Pyongyang is known for its aggressive rhetoric, recent remarks have been unusually personal.

Earlier this month state media ran misogynist articles, including one headlined “We accuse Park the bitch“, labelling her as a lunatic, idiot and “cold-blooded animal” and emphasising the fact that she has never married or had children.

Those remarks were presented in the form of quotes from ordinary North Koreans, while the latest tirade, carried by state news agency KCNA, is presented as a statement from an official body.

It comes days after a homophobic diatribe which described the head of a United Nations commission on human rights in North Korea as a “disgusting old lecher”. Pyongyang was angered by the team’s report, which said it was committing grave and systematic human rights abuses on a scale unparalleled in the modern world.

“What Park did before Obama this time reminds one of an indiscreet girl who earnestly begs a gangster to beat someone or a capricious whore who asks her fancy man [pimp] to do harm to other person while providing sex to him,” North Korea’s CPRK said.

Obama and Park had warned Pyongyang it could face strengthened sanctions if it detonated a fourth nuclear device, after North Korea said it could carry out a new kind of test. Satellite imagery has shown increased activity at a test site.

Those remarks “laid bare her despicable true colours as a wicked sycophant and traitor, a dirty comfort woman for the US and despicable prostitute selling off the nation,” said the CPRK.

It said the trip had shown North Korea was right to have concluded it should deal with the US “by force only, not just talking, and should finally settle accounts with it through an all-out nuclear showdown”.

The committee also accused Obama of being “utterly indifferent to the sorrow of South Koreans” over the sinking of the Sewol ferry, which has left more than 300 people, including many children, missing or dead.

“Had Obama even an iota of ethics and morality, he should have postponed or shelved his trip,” it said.

The US president expressed his condolences and offered South Korea any help required within 24 hours of the disaster. In contrast, North Korea expressed no sympathy until a full week later.

The statement also suggested that Park would be assassinated like her father, the late South Korean dictator Park Chung-hee. “Genes remain unchanged,” it said.

But experts do not believe the attacks are propelled by lingering animosity towards her father.

“It’s not so much about her personally, but rather a symbol of a new rhetoric … I think this is an attempt to use the same kind of emotional abuse as [Kim Jong-un’s] grandfather,” said Tatiana Gabroussenko, an expert on the regime’s ideology and propaganda at Korea University in Seoul.

She said that while North Korea always attacked its southern neighbour’s politicians, the “loud, personalised” tone of recent abuse seemed to echo the approach of the 1950s and early 60s. It might be part of emphasising his likeness to his grandfather, with a return to “proletarian candour”, she said.

“That was something used in Kim Il-sung’s time and applauded; it meant he was ‘one of us’, not an elite intellectual, speaking from his heart,” she added.

John Delury of Yonsei University described the remarks as “a new low point in the misogyny”.

He added that Pyongyang’s “deeply counterproductive” methods showed how ignorant it was of South Korea.

“There are deep fractures in South Korea and a lot of ways that North Korea could manipulate that,” he said.

Using the “comfort women” comparison in particular touched on an extremely sensitive issue, not only insulting Park but also the survivors of the second world war brothels, he noted. – By Tania Branigan © Guardian News and Media 2014