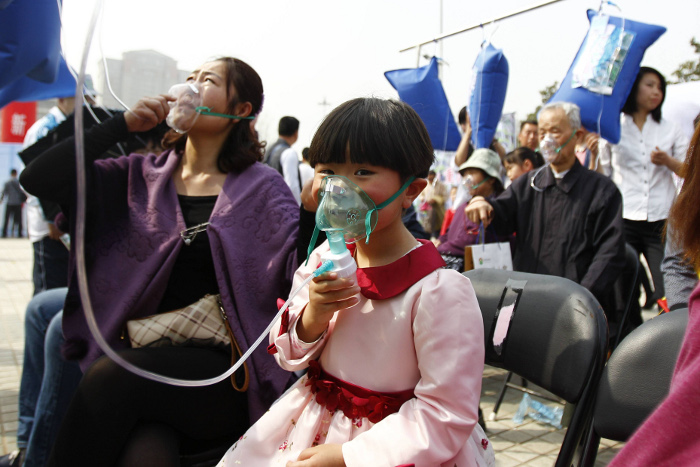 Women exposed to high levels of traffic pollution during the second trimester of pregnancy are at higher risk of giving birth to a child with weak lungs, researchers said Monday.

In a long-term study, investigators in Barcelona enrolled 1 295 pregnant women who attended pre-natal clinics in Sabadell, in Catalonia, and at Gipuzkoa in the northwestern Basque region.

They measured two traffic pollutants — benzene and nitrous dioxide — in the women’s residential neighbourhoods at different times during their pregnancy.

They used this data to draw up a model of exposure for the women, and also for their offspring during their first year of life.

The model took account of differences in geography, climate, population density and time of year.

When the children reached four and a half years of age, a nurse measured their lung capacity with an inflation gadget called a spirometer.

A total 620 pre-schoolers were tested — many others were unable to blow properly into the device.

The children of women exposed to higher benzene levels during their fourth to sixth months of pregnancy were 22% more likely to have impaired lung function than those from less polluted areas, the study found.

For nitrous oxide, the risk was 30% higher.

The link was stronger among children with allergies, or those from a lower social class.

But exposure levels to traffic pollution in the first year of life made no difference to lung strength, the inquiry found.

The results “suggest that exposure to traffic-related air pollutants during the prenatal period could adversely impact the developing lung,” the authors reported in the journal Thorax.

The team led by Eva Morales at Barcelona’s Centre for Research in Environmental Epidemiology, believe they are the first to give a long-term view of how air pollution during pregnancy can affect a child’s lungs.

The study did consider whether either or both of a child’s parents smoked before or during pregnancy.

But it did not examine whether the mothers had been exposed to gas, dust or fumes in their jobs while pregnant.

Nor was it powered to measure exposure to particulate matter, another notorious traffic pollutant.

In an independent comment, Seif Shaheen, a professor of respiratory epidemiology at Barts and the London School of Medicine and Dentistry, said a clearer picture may have emerged if pollution levels were monitored directly in the volunteers’ homes rather than their neighbourhoods.

Even so, “the findings should be taken very seriously by policymakers,” Britain’s Science Media Centre quoted Shaheen as saying.

“The results suggest that more needs to be done to reduce air pollution in order to improve public health, and in particular the lung health of the next generation.” – By Richard Ingham

Image – This picture taken on March 29, 2014, shows residents breathing “mountain air” from blue bags in a square in Zhengzhou in central China’s Henan province, reportedly brought in from 190km away by a Henan-based travel company as part of a promotional event. Premature deaths and health problems from air pollution cost China as much as $300 billion a year, an official joint report by the World Bank and the Development Research Centre of the State Council said on March 25, calling for a new urbanisation model for the world’s second-largest economy. (AFP)