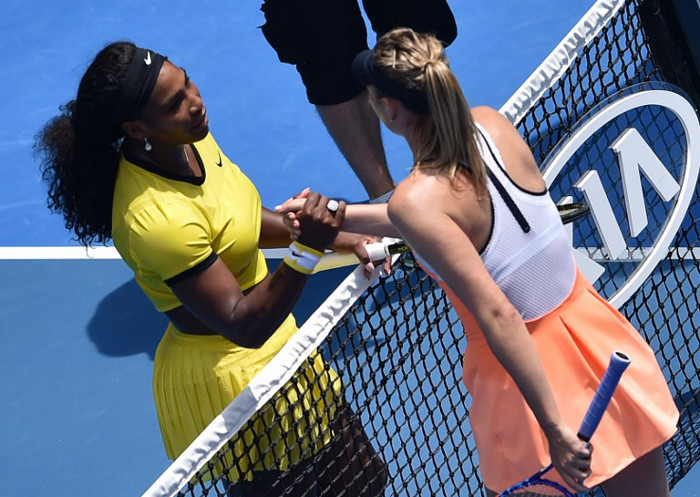 World number one Serena Williams destroyed Maria Sharapova for an 18th straight time Tuesday to inflict more pain on her long-time Russian rival and power into the Australian Open semi-finals.

The six-time Melbourne Park champion out-muscled the fifth seed 6-4, 6-1 and will meet Agnieszka Radwanska for a place in the final as she moves closer to matching Steffi Graf’s Open-era Grand Slam record of 22 titles.

The signs for Radwanska are ominous — every time the American has got past the quarter-final at Melbourne Park she has gone on to win the tournament, including last year when she also beat Sharapova.

For the Russian five-time Grand Slam winner, 28, her demoralising jinx against one of the greatest players ever remains intact.

It dates back to 2004 when she last beat Williams in the Wimbledon final. Her downfall started in an epic semi-final at the 2005 Australian Open, with the American scraping home in a 2-6, 7-5, 8-6 thriller.

“Maria is a super-intense player. She is an intense and focused player. She was world number one and has won so many Grand Slams for a reason,” said Williams.

“Playing someone like that you have to play with fire and intensity. I’ve been playing all week aggressive but I didn’t start out that way.”

On a scorching hot day, the sluggish 34-year-old American, gunning for a seventh Australian title, served first and stuttered immediately with the fifth seed breaking when Williams sent a backhand long.

Williams, the oldest world number one in Women’s Tennis Association history, is often a slow starter and Sharapova made the most of it to hold for a 2-0 lead as the top seed made a string of errors.

But Williams soon got on the scoreboard as her power serve found its range and her game started coming together. She broke back to make it level-pegging at 2-2 as the Russian’s serve faltered.

The errors were now mounting from 2008 champion Sharapova, who cooled herself down with ice towels at the changeover after Williams went 3-2 in front.

In contrast, the aces were starting to fly off the Williams racquet as she held for 3-3.

Sharapova’s first-serve percentage was falling and she went 0-40 down in the seventh game before showing grit to fend off the break points and claw back.

It was a tight battle and the Russian had two break points herself in the next game, with Williams showing emotion for the first time, screaming “Yes” and pumping her fist as she held on for 5-4.

It proved to be vital as she came through a titanic 10th game with a volley on her fourth set point, finally winning the set after a brutal 55 minutes.

Williams, who only lost three matches in 56 last season, called the trainer out, apparently feeling unwell, but she soldiered on and took control with an early break in the second set, wrong-footing Sharapova with a blistering backhand.

Sharapova was wilting and the double fault count was rising with Williams taking another break to lead 4-0. Sensing victory, she kept her foot to the floor and turned the contest into a rout.

Williams won three majors — the Australian and French Opens and Wimbledon — last year, which took her to within one of Graf’s long-time record of 22.

Image – Serena Williams of the US shakes hands as she celebrates after victory in her women’s singles match against Russia’s Maria Sharapova on day nine of the 2016 Australian Open tennis tournament in Melbourne on January 26, 2016. (AFP / Peter Parks)