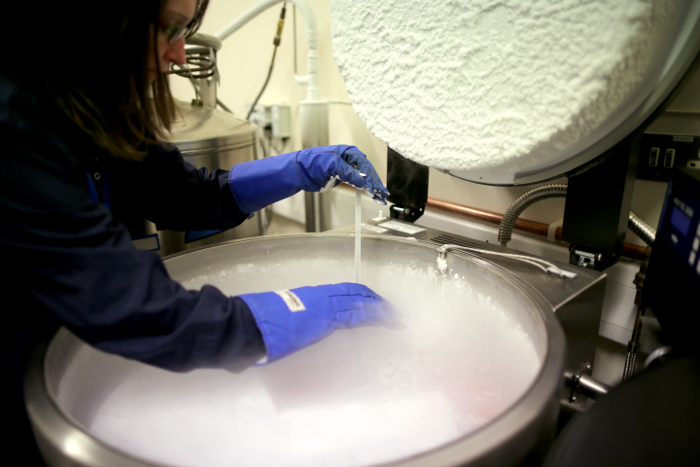 It was bound to happen. A pop-up shop for a debate on egg-freezing, designed to respond to “growing public interest” in “social” egg-freezing – ie the freezing of a woman’s eggs before there is any medical reason to do so, and before she has any plans to start a family.

“Social egg-freezing is a relatively new offer,” say the directors of Liminal Space, a consultancy that “specialises in curating learning experiences”. But, they add, it’s something that may soon become “as revolutionary to women’s choices as the pill”. The project, Timeless, will “pop up” in London from the end of the month. It is part-funded by the Wellcome Trust.

To be fair, this project has a whiff of the playful and a hint of the Chris Morris about it. One of its offerings is a tongue-in-cheek perfume line called Eau So Pressured. It will feature a series of talks by fertility experts and testimonies of women with first-hand experience of egg-freezing. I somehow doubt that any of them will be bringing a baby with them. But I can see all this is good for opening up debate. I just wish we didn’t keep having this bogus non-debate in the first place.

Referencing last year’s decision by Apple and Facebook to include egg-freezing options as part of their benefits package for female employees, Timeless is perhaps, er, timely. And there’s nothing wrong with providing more accurate information on this subject, which is what Timeless is designed to do. What would be much more timely, however, would be to admit directly that social egg-freezing is utter delusion and nonsense.

Why should any of us take it seriously as a concept in the first place? I have been reporting on this “phenomenon” (it is not a phenomenon) for almost 15 years, since it was first vaunted in the US as a way of releasing women from their biological clock. It’s supposed to be the ultimate Bridget Jones solution: pay a few thousand pounds to have your lovely fresh and youthful eggs harvested in your 20s or early 30s and make use of them when you’re good and ready. How liberating!

The truth about social egg-freezing is that it’s a slightly weird (and expensive) way of anticipating IVF treatment that you may or may not need to have. It seems to make the promise of a guarantee or fallback. But instead it’s just introducing more Russian roulette into your family planning in the guise of a faulty insurance policy. You may never need to use those eggs. And even if you do, the procedure may not work. There’s no money-back guarantee.

The reality is exploitative scaremongering that makes a mockery of the entire fertility industry. Of course egg-freezing techniques are invaluable, and the science behind them deserves to be lavishly funded to benefit those with a medical need. Medical egg-freezing gives a chance (usually the only chance) to women who are diagnosed with some cancers, for instance. Social egg-freezing is not used as an only chance, though. It’s presented as a bizarre sort of extra chance. As if you can cheat time. Newsflash: you can’t.

Amid all the headlines and excitement around egg-freezing with its empty pseudo-feminist promises, where are the women who have benefited from it? Have you heard of anyone of your acquaintance, even anecdotally, who has used this “socially” in the past 15 years and would recommend it to others? The case studies are thin on the ground.

On the other hand, who among us doesn’t know someone who has had IVF (without social egg-freezing), using their own genetic material or donor eggs? We all know someone, maybe many people. These are the people who deserve the research and the headlines and the funding: the women and men with fertility problems (which often don’t have to have anything to do with age).

Over a third of infertility is still unexplained. As are a third of miscarriages. It’s a scandal that we debate pointless and largely nonexistent social egg-freezing while marvelling at the seemingly exciting and “progressive” (actually retrograde) workplace policies of Facebook and Apple, all the while ignoring the real issue in front of us.

If you’re recruited by a company offering you financial assistance to freeze your eggs as a young woman, what are you really signing up to? “We have an idea that you might be needing IVF one day. Let’s give you a helping hand with that.” It’s hideous. The success rate for IVF per cycle is between 20% and 40%. It’s not something you sign up to willingly. It’s a last resort.

Meanwhile the one thing that we could fix easily without money or false promises gets comprehensively ignored: namely, social attitudes towards working parents. Because you don’t need to worry that much about your fertility if you can have a family when you’re ready (and when you’ve met the right person) and when it doesn’t disrupt your working life. But, of course, who wants to go to a pop-up shop and talk about that unsexy, complicated stuff? – By Viv Groskop