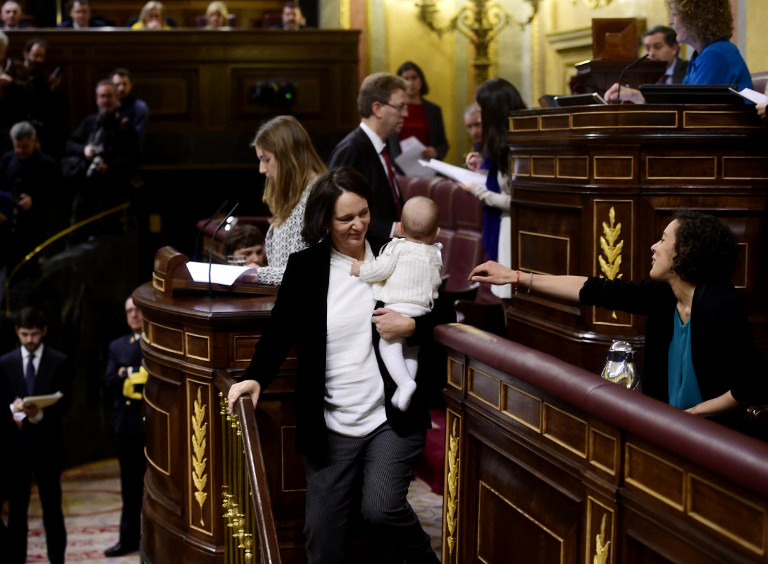 He has not been elected and he cannot vote on policy, but five-month-old Diego was one of many new faces as the Spanish parliament convened for the first time since last month’s inconclusive general election.

In the absence of any progress towards forming a coalition government, Diego, son of the Podemos MPCarolina Bescansa, stole the show and the headlines. “If a mother has to care for her child she has to care for him wherever,” Bescansa said. “It’s time that this chamber started to resemble the rest of the country.”

The Podemos leader, Pablo Iglesias, cuddled the infant, but not everyone thought bringing a child into such a charged environment was a good idea. Carme Chacón, a former defence minister, pointed out that there was a day nursery in the parliament.

“I was still breastfeeding when I was minister and the child stayed in my office,” she said. “After three hours I had to call a recess so I could feed him.”

The acting interior minister, Jorge Fernández Díaz, described it as “lamentable that a child should be used for political motives”. His Popular party colleague Beatriz Escudero agreed, tweeting that “the Podemos MP is using her child to get on the front page. No one who hasn’t been elected should be allowed in the chamber”.

Political correctness is a minefield however, and Bescansa also took flak from the Federation of Progressive Women, Women for Equality and the Women’s Foundation, which criticised the MP for “perpetuating the idea that it’s a woman’s job to care for children”, and breaking with the concept of responsibility shared between parents.

Podemos said Bescansa’s move was “a symbolic gesture on behalf of all women who try to strike a balance between work and family and today are unable to do so”. – By Stephen Burgen

Image – Podemos’ deputy Carolina Bescansa holds her baby after depositing her ballot during the constitution of the Congress, at the Palacio de las Cortes in Madrid on January 13, 2016. (AFP / Pierre-Philippe Marcou)