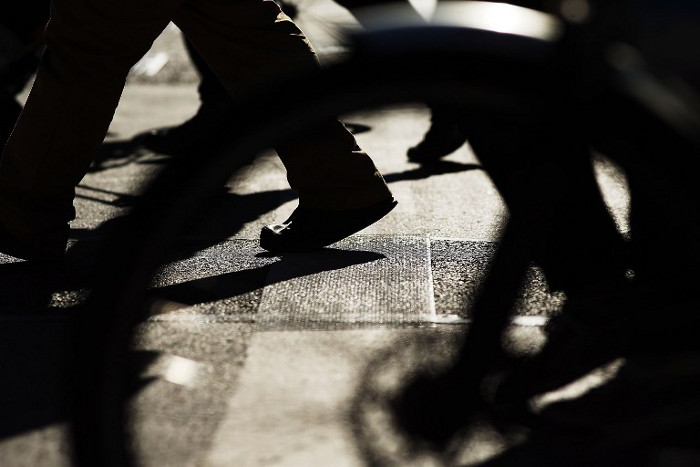 I did something brave the other day — and stupid but also brave, but yes stupid.

You see I recently got a pedometer and am really excited about it. I am trying to get to 10 000 steps a day for a healthy heart — that’s as good a New Year’s resolution as any! My daily life of commuting from home to office doesn’t afford me with much walking time (roughly 2 000 steps a day) so I have started walking in the mornings, at lunch and when I get home from work. That’s it, three short bouts of walking and I’m up to 10 000.

So I was walking with my husband one afternoon when I saw two men start calling after a woman on the opposite side of the street. She put her head down and kept walking. My husband nudged me and pointed with his eyes.

You know those people that are trying to make eye contact with you when you are in a shopping mall because they want to sell you cream or something. They latch their eyes onto you, call after you and no matter how many clues you give them with your body — head down, walking far, far away and picking up pace — they persist. Yes, that’s what street harassment is like. It feels awkward and invasive but oddly you don’t want to be impolite so you just put your head down and carry on.

But for these men calling after this woman, once or twice was not enough. They decided to stop in their tracks and continued shouting after her. Initially I didn’t understand what was being said but her body language said enough. All the tell-tale signs were there: she averted her eyes under big glasses, put her head down, and picked up pace. Then the men switched to English “Hey, baby, hey”.

As we walked past the men my mouth opened and I found myself saying “Leave her alone!” I was to the point and said it with so much authority that I surprised myself. Immediately I turned around and sped up.

As soon as we were out of earshot I glanced over my shoulder to see that my remark had got the men moving and thankfully in the opposite direction. I breathed a sigh of relief. Then my husband turned to me and said “Don’t get involved in other people’s business”.

This infuriated me. “What do you mean don’t get involved? Too much abuse and harassment is condoned because people don’t want to get involved in other people’s business.”

“You don’t know what they were saying. They might have been offering her help,” he exclaimed.

My mouth dropped, “don’t be glib. You know what that was”.

“What you did was brave” he said “but just don’t get involved in other people’s business, not in South Africa”.

I realised then that there were two debates happening here: 1) About people calling out bullshit sexism and 2) Fear of getting involved because of crime levels not “other people’s business”.

I have written elsewhere about how narratives of fear govern our behaviour and how we feed fear every time we talk about violence and hear the news, but when it is you on the ground and you have just blabbed your mouth off to two men while walking on a secluded street, fear becomes real.

I spoke, without thinking. Their behaviour was irritating me. The woman was clearly giving signals that she was not interested and yet they continued. Their sense of entitlement exasperated me and I told them to bugger off.

I have to wonder if I would have censored myself had my husband not been next to me, had I been all alone. It’s a false sense of security having someone with you because let’s be honest if they had a gun, or knife or just wanted to beat us up, there is not much either of us would have been able to do about it.

More likely, these were two ordinary men not violent criminals and they wouldn’t want a fight any more than we would. Somehow that makes me even sadder about the state of gender affairs in our country. If they were two hardened criminals doing it then they would be two douchebags to begin with but as two ordinary men it says that this is normal and no one is problematising it.

More people should be calling people’s bluff when it comes to harassment but we shouldn’t be idiots either. I will probably do it again, tell a harasser to get lost, but next time I will think a little before I do. I will make sure that I am on a busier street and that I have an exit strategy should those two ordinary men be violent. But chances are, all they need is a good check — a dose of embarrassment goes a long way.

At the heart of the problem of street harassment are two things: 1) Men’s sense of entitlement and 2) People’s fear calling it out when it is blatantly obvious. When you are the one being targeted you feel small, vulnerable but when someone else calls it out, you realise you are not alone and that behaviour is not OK.

Getting a healthy heart is easy, I walk 10 000 steps a day and am better for it — figuring out the steps needed to improve the heart of our nation and its sorry gender affairs is a bit more complicated but maybe the answer lies in smaller, everyday acts that create change, slowly, over time. I hope those two men, question themselves the next time they call after a woman and I hope I think things through before deciding to be brave.