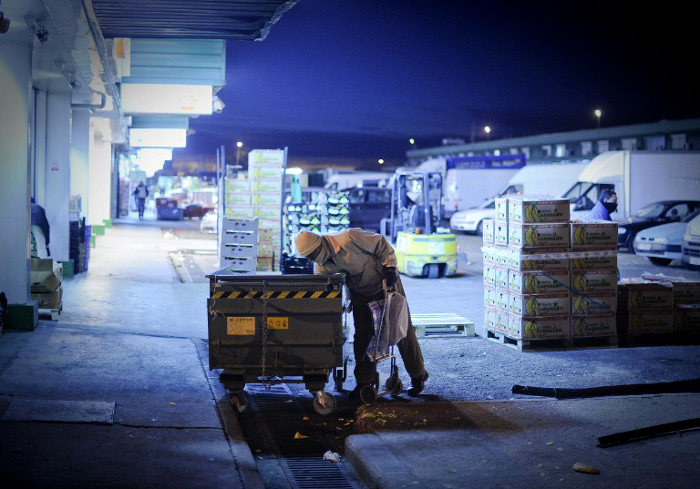 The large white fridge sits prominently on a pavement in Galdakao, a small city on the outskirts of Bilbao.

A wooden fence has been built around it, in the hope of conveying the idea that this is not an abandoned appliance, but a pioneering project aimed at tackling food wastage.

For the past seven weeks, Galdakao, population 29 000, has been home to Spain’s first “solidarity fridge”, in which residents and restaurants can drop off leftover or unused food otherwise destined for the bin. Anything left in the fridge can be picked up by anyone who wants it. “I would guess we’ve saved between 200kg and 300kg from the rubbish bin,” said organiser Álvaro Saiz. A typical day might see leftover lentils, a few sandwiches and unopened milk cartons left in the fridge.

The idea came about as Saiz and other members of the city’s volunteer association were reflecting on the sheer amount of food being thrown out by supermarkets. “We started to think that if even just one of their rubbish bins was replaced with a fridge, people could take advantage of these items.” After an online search revealed a network of shared fridges in Berlin, he said. “We realised we could do this — so we did.”

It took about a month to wade through the paperwork needed for the project, including securing a permit from the city to use public space and obtaining the right legal documents to ensure organisers wouldn’t be held liable should anything go wrong with food taken from the fridge.

As his group pushed forward with the idea, they heard all sorts of opinions from city residents, said the 36-year-old. “I realised that the people who don’t support it, it’s because they don’t understand what we’re doing.”

The goal, according to Saiz, isn’t to feed people in need. “This isn’t charity. It’s about making use of food that would otherwise end up in the bin,” he said. “It doesn’t matter who takes it — Julio Iglesias could stop by and take the food — at the end of the day it’s about recovering the value of food products and fighting against waste.”

There are strict rules for anyone leaving food in the fridge: no raw fish, meat or eggs, packaged or canned goods cannot be past their use-by date and anything prepared at home must include a label detailing when it was made.

Volunteers keep an eye on the fridge to throw out anything past its use-by date or homemade dishes that are more than four days old. But that’s in theory: so far all food has been taken on a daily basis.

All sorts of people have dropped by so far, said Saiz, including those in need who make a special trip to the fridge from nearby towns and a construction worker who took an ice-cream bar — dropped off with just a few days left before its best-before date — during his lunch break.

Last week the city of Murcia, some 400 miles away in the south of Spain, copied the idea and became the second Spanish city to host a solidarity fridge. Saiz has received calls from communities across the country — and from as far as Bolivia — from people interested in setting up similar operations.

The fridge has also allowed local restaurants to alleviate guilt over their food wastage, said Álvaro Llonin of Topa restaurant. “Before we used to throw away a lot of food — and it was food that was fine to eat.”

He and the staff at the busy restaurant in the centre of Galdakao now regularly make time to drop off their leftovers in the fridge. “You know someone is enjoying it,” he said. “It’s like giving our food a second chance to end up in someone’s stomach.” – By Ashifa Kassam

Image – A man collects food from a dumpster at the main food market on December 29 2011 in Madrid. The poor scavenge for discarded fruit and food, hunting among the delivery trucks at the Mercamadrid. Their plight is bleak evidence of Spain’s stalled economy, and a queue of five million jobless people. (AFP)