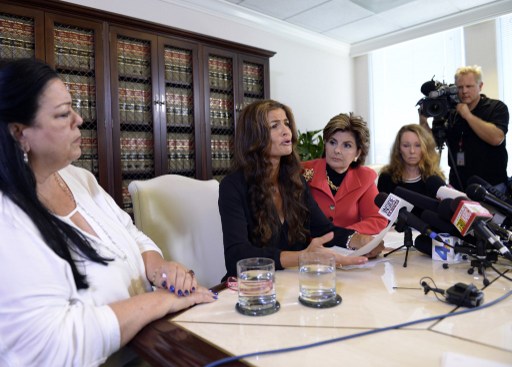 The women spoke at a news conference in Los Angeles, tearfully recalling their encounter with the disgraced comedian and how he allegedly abused them.

The three join dozens of other women who have come forward in recent months claiming sexual abuse by the TV legend.

Lisa Christie, a former Mrs America, said she met Cosby when she was an 18-year-old aspiring model and actress, and for two years he flew her back and forth to New York and Buffalo but never tried anything as “he knew that I was a virgin and raised Christian”.

But then, she said, the comedian tried to pressure her into having sex.

She said when she refused his advances, Cosby warned that she would never make it in the business unless she slept with him.

“I responded ‘shame on you Mr Father Figure of America’, your kids are older than I am,” Christie said.

Pamela Abeyta said she met Cosby in 1979, when she was 25 and hoping to appear in Playboy magazine.

She said Cosby invited her to Las Vegas where she stayed in a separate bedroom at his penthouse hotel suite.

She said she believes someone put something in her drink when she attended a show with Cosby and his friends. Abeyta said she passed out at some point and woke up in the comedian’s bed.

‘Knew I was drugged’
Sharon Van Ert said she met Cosby when she worked as a waitress at a California jazz club in 1976 and he offered to walk her to her car one day.

She said she remembers Cosby “getting fresh” with her and rubbing her leg before she passed out.

“The next thing I remember was waking up in my car, my head hanging down from the seat, alone,” she said. “I knew I was drugged because I threw up and I never threw up or drank too much.”

The women’s testimony at the offices of celebrity attorney Gloria Allred comes just a week before the disgraced comedian is set to give a deposition in a separate sexual assault case.

That case involves a woman who alleges Cosby sexually assaulted her at the Playboy Mansion in Los Angeles when she was 15.

Allred, who is also representing the woman, said she is fighting a motion by Cosby’s attorneys to prevent public release of the deposition.

Cosby’s attorneys have repeatedly denied any wrongdoing by the 78-year-old comedian who went from being America’s pre-eminent father figure on The Cosby Show to pariah over allegations of sexual assault spanning four decades.

In a deposition in 2005, Cosby admitted that he used sedatives to lure at least one woman into having sex.

The statute of limitations prevents most of the women who have accused the comedian of sexual assault from taking legal action. The case for which he is being deposed may go forward as the alleged crime took place when the woman was a minor.

Rape allegations against the comedian first surfaced more than a decade ago but they largely went unnoticed with the women involved treated with scepticism and the comedian’s career rolling on.

But the latest wave of accusations has led to TV networks backing away from projects with Cosby and several universities stripping him of honorary degrees. – By Jocelyne Zablit