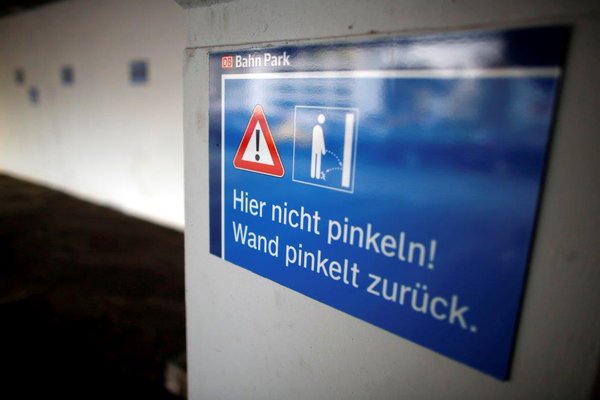 A railway station in Cologne has hit back at people who urinate in public, putting up signs in one particularly troubled section of the car park warning “the walls pee back”.

A spokesman for the railway company Deutsche Bahn told Kölner Stadt-Anzeiger, a local newspaper, they were deterring “wildpinklers”, or “freepee-ers”, from taking a piddle in public by covering “a 30-metre stretch of wall with a special kind of paint that’s extremely hydrophobic”.

“It means any stream of liquid aimed at the wall will bounce back off at roughly the same angle,” a spokesperson explained. A diagram on the car park wall offers a more visual explanation.

Cologne is not the first German city to pit hydrophobic paint against public urination, following an initiative that began in Hamburg’s St Pauli party district in March.

It costs about €700 to cover six sq metres with urine-repelling paint, which has raised some questions over the idea’s efficiency.

Uwe Christiansen, a board member of the St Pauli Interest Community, came up with the idea. “It was a real annoyance that was growing and growing,” Christiansen told website The Local in March. “People were just tired of the peeing on walls, home entrances and playgrounds.”

The project’s promotional video has since had over five million views.

Liquid-repelling paint was originally used by Nissan to keep cars clean with the paint acting as a deflector for water-borne dirt.

According to Ultra-Ever Dry, a paint manufacturer, an object coated with hydrophobic paint develops a surface chemistry and texture with patterns of geometric shapes that have “peaks” or “high points”. These high points repel water, some oils, wet concrete and other liquids.

Other cities have also been considering using the paint with pee-repelling technology. San Francisco covered nine walls with the paint in a pilot programme this summer in areas around bars and others with large homeless populations, and during the UK general election campaign earlier this year, Manchester council said it was considering using nano-tech paint to bounce back anything sprayed at it.

However, there were concerns it could mean that unsuspecting pedestrians were splash-backed by other liquids, such as rainwater from passing cars. – By Aisha Gani