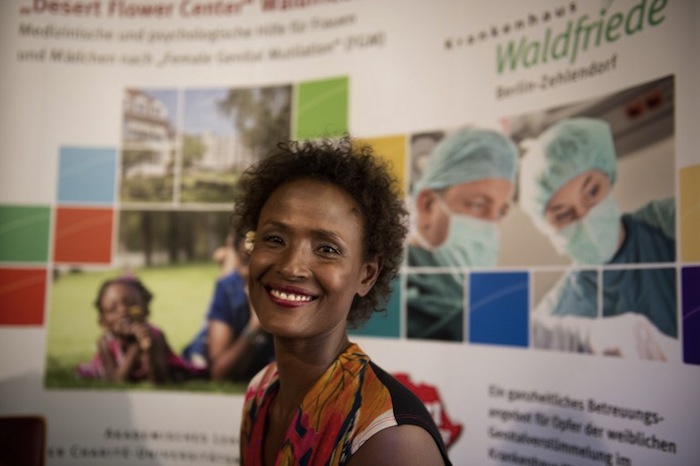 Waris Dirie was about five years old when she was left in a makeshift shelter under a tree for several days to recover from her “operation”, like all the girls in her community, she had undergone female circumcision, more accurately known as female genital mutilation (FGM). She still remembers her anger. “When they tried to convince me that God wants this, I said: ‘Did my God hate me so much?’ I remember telling my mother: ‘If he hates me, then I don’t want him.'” In the days after FGM, many girls die from blood loss or infection. Dirie says she lay there, talking to God, saying “make me stay alive. You owe me this now.”

Dirie, born to a nomadic family in Somalia, describes herself as not exactly the kind of daughter dreamed of by the traditional families in her community. As a very young child, she was wilful and headstrong, constantly questioning everything. When she was about 13, her father announced that she would be married to a man in his 60s. “I knew [most married women in her community] put up with everything and anything. Any abuse, hopelessness, and I thought, was I here to be used and be abused? I knew there was so much I could do with my life, but on my terms.”

Her terms have led to an extraordinary life and we meet in a London hotel room as Dirie prepares to receive a Woman of the Year award for her campaign work. Under the threat of her impending marriage, she ran away, running barefoot across the desert for days until she reached relatives in Mogadishu. From there, she managed to make it to London – an aunt was married to Somalia’s ambassador to Britain – and she worked as their maid for several years. When they returned to Somalia, she stayed on, learned English and got a job at McDonald’s, eventually being spotted by a photographer. By the 1990s, Dirie had become a supermodel, fronting Chanel campaigns and appeared in the James Bond film The Living Daylights.

Modelling could be fun, but ultimately wasn’t fulfilling. “I thought, ‘This is bullshit, fake.’ I couldn’t sleep one more night knowing the truth about what was happening to girls and look all …” She gives a mock smile as if posing in a fashion shoot. “I just knew that I had to tell the world that there was torture, an undercover war against women. But this is not one person’s war – all of us have to do something.” Now, she says, there is more awareness of FGM, but in the 1990s, “what really made me take a stand was that nobody was doing anything”.

Dirie’s profile had given her a voice and when she went public, in a magazine interview in 1997, about what had happened to her, and her desire to stop FGM, largely practised in communities in Africa, the Middle East and Asia, it created a great deal of attention. She was appointed a UN special ambassador; in 2002, she set up her Desert Flower Foundation to campaign against the practice.

The World Health Organisation estimates there are about 140-million women in the world who have had FGM, from removal of the clitoral hood to the whole excision of external genitalia before the vagina is sewn up, with only a small hole left for urine and menstrual blood. It usually happens before the age of 15, and in some cases is performed on babies, in the belief that the girl will grow up “clean”, her “honour” intact along with her virginity as a way of preparing her for marriage; this happens to three million girls every year. Aside from the intense pain and risk of infection at the time, it carries lasting consequences: difficulty urinating, sex is painful and pleasure-free, and childbirth can be fatal both to the baby and the mother. Botched FGM can leave women doubly incontinent and ostracised by their communities.

In many countries, it is a crime, though one in the UK at least which has failed to lead to any prosecutions. Why does she think so little has been done to eradicate it? “Anything to do with females is considered less important,” she says. The other argument she hears is that it is a “cultural” practice – tolerated on one side by people who don’t want to be seen as racist if they interfere; ignored on the other side by people who are not interested because it doesn’t affect them.

“If a white man or woman saw a white child that is mutilated, there would be screaming. I guarantee it would end,” she says. “This is abuse against a child, so to say this is your ‘thing’, it’s to do with your religion or race, it’s all wrong. This is about child protection. I don’t see anything else, and I think it’s covered up by racism, and the idea that ‘I don’t want to get involved’. It’s pure violence against girls, and it destroys the rest of their lives. And for what? For who?”

It also doesn’t help that the practice is so hidden. “As long as the problem stays undercover then nothing much happens, or at least not fast enough,” says Dirie. “If we put it into the open, if it’s on TV and in the newspaper, if we have politicians and religious leaders talking about it and saying no, then we fight it together.”

It isn’t only something that happens in rural communities in Africa or Asia. This summer, the NSPCC opened its first helpline to support girls at risk of FGM in the UK – figures are difficult to come by, but one study estimates there are 66 000 women in England and Wales living with FGM, and 20 000 girls are at risk.

It happens in immigrant communities, says Dirie, “because first of all the community stick together. They bring the same behaviour, even though they live right here in London. So the child doesn’t know any different but follows the rule of the parent and what they think is the right thing. We need teachers, doctors, social workers, the police – all these people have to be informed, open and talk to the community.”

Last month, in Berlin, Dirie opened the first of what will be several medical centres to offer women who have endured FGM reconstructive surgery. Over the next year or so, she hopes to open other clinics in Kenya, Ethiopia, the Netherlands and Switzerland. But she says, “I don’t want to put too much focus on it, because the whole point is to stop this mutilation in the first place. We don’t have to have special hospitals to reconstruct a God-given thing.” She would like to do other things – sing, act, be a fashion designer for women of all shapes and sizes. “But then I think I can’t turn back, not now I’m almost there. You just have to keep going until one day it will come to an end.”

Dirie, now 48 and living in Poland with her four children, says the emails and calls from suicidal women, and the knowledge that thousands of girls are still enduring FGM every day, still makes her angry and can be exhausting. But she is hopeful. “The world is changing, especially with technology, [people have access to] any information. I don’t want little girls to be like me, to travel the world to find out that this doesn’t happen [to all women] and what has happened is wrong.” -guardian.co.uk © Guardian News and Media 2013