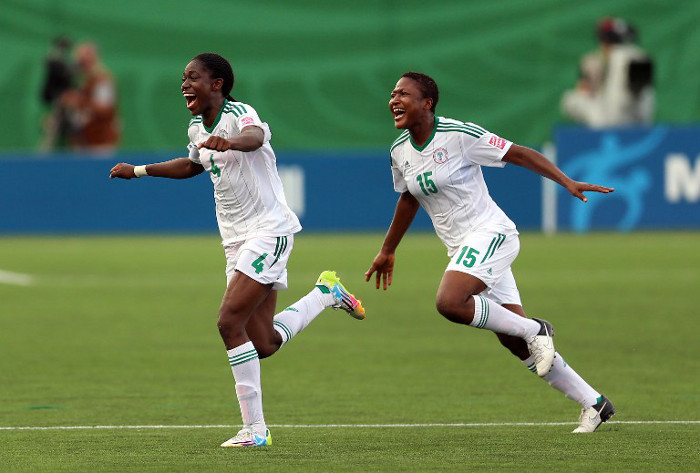 Nigeria have been Africa’s commanding team in women’s soccer, ever present at every Women’s World Cup, and are finally hoping to step up and join the list of the tournament’s top contenders.

The Super Falcons kept up an obligatory African presence at the last six World Cups but made little headway. In recent years the gap has narrowed and after Nigeria finished runner-up in last year’s Under-20 Women’s World Cup, there are now hopes Nigeria could be a realistic challenger.

“Our desire is to be counted at the World Cup and we won’t leave any stone unturned to ensure we achieve the target,” coach Edwin Okon said in a recent Nigeria press interview ahead of the June 6-July 5 Women’s World Cup in Canada.

The target is at least a place in the last eight, emulating Nigeria’s best ever achievement at a Women’s World Cup when they got to the quarter-finals in 1999.

Key to Nigeria’s hopes will be a positive result in their opening game in Group D against Sweden in Winnipeg on Monday. They also play Australia and the United States in a tough draw.

Okon has put heavy emphasis on fitness ahead of the tournament and there has been a lengthy preparatory camp.

African Women’s Footballer of the year Asisat Oshoala leads their squad, having made a recent move to join Liverpool’s ladies team and in the process become the first African in England’s Women’s Super League.

She is an exciting forward who was voted the best player at last year’s U-20 Women’s World Cup, also played in Canada, after a tournament-record seven goals.

The Nigerian captain is Evelyn Nwabuoko and 12 of the players are foreign-based, a major factor in the improvement of Nigeria’s performances.

“As African champions I want you to go to the World Cup this time with a clear determination to do better than any of your predecessors have ever done,” Nigerian Football Federation president Amaju Pinnick told the team before they left for Canada two weeks ago. “We believe you can.” – By Mark Gleeson